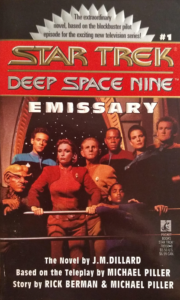 This week, Benjamin Sisko boards the galaxy’s most remote truck stop with his arms full of baggage, and I don’t mean Samsonite. He’s far from the station’s only disgruntled employee, however, and every one of them will have to turn those frowns upside-down if they hope to clean up after the previous Cardassian tenants. Sisko tells Picard to take this job and shove it, but the sudden appearance of a seemingly stable wormhole may render the question of a career in academia academic. Is Sisko the messiah the Bajorans have been searching for? Can a hew-mon and a Ferengi be friends? And how often do Vulcan names get recycled? All this and more in Emissary, the book that was made possible by a grant from the Jake Sisko Career Fund and by Viewers Like You.

At long last, we place the third jewel in the crown of our rotation, the series from which the very website you are reading right now derives its puntastic moniker: Deep Space Nine. When Deep Space Nine premiered on January 3, 1993, its flavor immediately distinguished it from the rest of Trek to that point, especially the squeaky-clean Next Generation. It took less than two years after Gene Roddenberry beamed off this mortal coil for the stewards of the next series to take his dictum of no interpersonal conflict (along with a number of other long-held Star Trek customs) and cram them up a Jefferies tube. Not that that’s a bad thing. Far from it, in fact. On the whole, I’d call Deep Space Nine my favorite series of the franchise. But that’s neither here nor there right now; let’s jump right in and meet this motley crew of frumpy frowny faces.

Benjamin Sisko is the newest arrival to the station, the Starfleet officer chosen to oversee the Bajoran transition to independence following the end of centuries of Cardassian occupation. Sisko comes to the station with a rain cloud over his head. Three years have passed since he lost his wife Jennifer during the Federation’s battle against the Borg at Wolf 359, and he’s still incredibly bitter about it. Mired in resentment, he holds Jean-Luc Picard (who was assimilated, renamed Locutus, and forced to lead the Borg offensive against the Federation) personally responsible. In fact, the moment when Picard meets Sisko in person to hand over the reins and Sisko promptly gives it to him with both barrels is one of the more emblematic manifestations of DS9’s paradigm shift.

Rounding out the rest of the main cast are Ben’s son Jake, an only child who’s tired of moving and losing friends, has come to associate space with danger, and wants to go back to Earth; Major Kira Nerys, who spent her childhood toiling in Cardassian camps and later striking back against her oppressors, respects Starfleet only barely more than the Cardassians, and wrestles inwardly with matters of faith; Jadzia Dax, the Trill science officer whose previous host Curzon Sisko was good friends with; Miles O’Brien, ported over from TNG, who bears the unenviable task of repairing the systems the Cardassians stripped when they moved out; Odo, the shapeshifting constable with a extremely rigid sense of justice who yearns to learn literally anything about his origins; and Quark, the Ferengi bartender whom Sisko ropes into rebuilding the community around the station’s recreational promenade. The only crew member with a truly sunny disposition is Julian Bashir, the Academy-fresh doctor whose naive craving for frontier adventure severely grinds his new comrades’ gears.

First seasons of Star Trek tend to be pretty rough, their pilots even more so. “Emissary” isn’t perfect, but I would deem it the best among Trek pilots I’ve seen.1I can’t, as of this writing, speak with any authority on “Broken Bow” or “The Vulcan Hello”. It’s the one that’s the most assured of itself. It has a clear sense of purpose and seems to have a healthy knowledge of what its characters are working with going in. The social and hierarchical dynamics, although more complex than in Treks past, establish and connect smoothly. I think that of all Trek pilots, it’s the one that comes closest to achieving at the outset everything that it wants to. All well and good for ninety minutes of television—but what does that leave the person writing the book version to do?

In this case, not a whole lot. There’s actually little here that you can’t glean from watching the episode. Most of the original elements come in the form of flashbacks, such as Sisko’s evacuation of the Saratoga and O’Brien’s accidental murdering of a Cardassian at Setlik III. Jake and Nog also meet here, as opposed to a few episodes later, based on material from the teleplay Dillard worked from. There’s also a lot of exposition, some of it appreciated—for instance, I don’t recall if it’s explained in the pilot why Odo is so insistent about no weapons on the promenade, but the book takes an educated whack at it—and some of it frankly baffling. (More on that below.)

But the only truly disappointing aspect of the book version of “Emissary” is that it doesn’t give J.M. Dillard’s voice any chance to shine. She’s been able to put her stamp on the later TOS films, but perhaps since these characters weren’t known quantities yet, she could have had less wiggle room. Whatever the case, there’s nothing in this book that immediately and definitively marks it as a Dillard work,2Actually, there is one thing. Again, more below. and it does suffer for it, both in terms of enjoyability and necessity.

So if you’ve watched the episode, you’ve more or less read the book, which is disheartening, but thankfully is more the exception than the rule. It is a solid episode, however, especially for a pilot, and worth revisiting in any form—certainly, I’d return to it before I would to “Encounter at Farpoint”. Really, it’s more of a formality than anything; what I’m really excited for is to start moving into the original stories and seeing what authors manage to do with what I personally consider the most compelling of any of the crews.

I give Emissary 3 out of 5 stable wormholes. It’s one of the less thrilling novelizations we’ve checked out so far in terms of beefing up the source material, yet nevertheless executed solidly and competently all the same. You don’t get nearly as much of that unique Dillard feel as you do from other novelizations she’s helmed, but the fact that you get to meet arguably the most interesting crew in the franchise makes up for it. Of all the series to be covered, this is the one I’ve been looking the most forward to since the site’s inception, and revisiting the franchise’s strongest pilot makes for an auspicious start.

NEXT TIME: The Enterprise-D gets Grounded