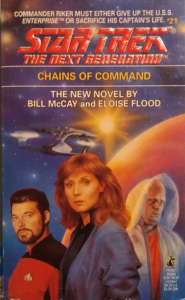 This week, Riker feels the cold, clammy hand of anxiety grabbing his shoulder. But there’s no time for that, because a survey of desolate worlds turns up unexpected humans. Once the dust settles from the latest revolt, they discover a cockfighting ring—but it’s the birds pitting the humans against each other. Meanwhile, a young rebel leader learns that overthrowing the oppressor is merely the first victory. Why is Star Trek so bad at dealing with trauma? What’s the minimum threshold for getting to have an opinion on the bridge? And how much would a top-of-the-line thought-blocking helmet set Deanna back? All this and more in “Chains of Command”—no, not the one with the four lights.

While charting a run of devastated, deeply scarred planets, one of them, a seemingly unpopulated ball of ice, gets in touch with the Enterprise. Some barely coherent ramblings about “gangs” and “masters” get through, and the Skype call cuts off when a revolt breaks out. The away team that beams down is attacked by men in gray, then saved by men in brown. The brown-clad freedom fighters are led by Koban, a young spitfire who has something kind of gnarly going on with the left side of his face.

Gradually, it comes to light that the humans are descended from a band of refugees that fled the Eugenics Wars in the 1990s, and for generations have lived under the thumb of the Tseetsk, an avian race that viewed the humans encroaching on their space as a threat. The Tseetsk consider murder the most abominable of crimes, so rather than kill the humans outright, they divided the men into slaves and overseers, put them to work in their remote mining operation on the ice world, and took the families back to their homeworld for regular repopulation of the two groups. Much more humane, clearly! Most of the humans’ anger toward the Tseetsk comes out in the form of the derisive nickname “the chickens”, presumably on account of a long-forgotten ancestor’s love of legendary jazz fusion bassist Jaco Pastorius.

Assuming success is measured by body count, Koban’s revolt is very successful. His coterie kills all but one of the overseers, Vossted, who only remains alive because of his and Koban’s tight student/mentor bond. Vossted, one of the more sympathetic overseers, taught Koban everything he knows, including the knowledge of the mining complex and the skills that facilitated the rebellion. Vossted and Riker think the Tseetsk can be reasoned with, but Koban and his cohort disagree. Although Koban’s initial success earns him a mountain of credibility, it dwindles rapidly as his sentimental attachment to Vossted begins to undermine his authority and his followers demand more results. Unsatisfied and impatient himself, and all too aware of the impending return of the Tseetsk, Koban has Picard and Troi knocked out with a concentrated dose of Tseetsk pheromone and gives Riker an ultimatum: hand over the Enterprise so I can vaporize the chickens, or bad things will happen to your captain and counselor.

Chains of Command expends minimal effort on a tenuous parallel between Koban and Riker. Riker is enamored of the young Koban’s natural leadership talent, but fears lapsing into unobjectivity. As it happens, he’s in the throes of his own doubts about his command skills after a routine survey gone horribly wrong (more on that later). But the book isn’t able to give that thread the focus it requires to be compelling or even coherent, and so it just kind of hangs limp, especially in the final third where the Picard/Troi action dominates. Riker and Koban both struggle with their own titular chains, but they don’t have as much to do with each other as the book might want them to.

Most of what kept me gripped to Chains of Command (during the moments in which I was) was its unflinching nature. This is a novel that does not shy away from brutality, sometimes to the point of being needlessly lurid, though generally it finds a solid middle ground between the sanitization of television and the freedom afforded by a less stringently regulated medium such as literature. The death that opens the story is the good kind of bracing shock, as is Vossted’s account of how Koban’s face became disfigured. Other moments, like the slaves’ reactions to Deanna, are significantly more raw and discomfiting. Overall, however, I felt it gave the book a strong personality, and it’s always a pleasant surprise when a TNG story reads a little more like DS9.

A handful of other details put a few more dents in the overall product. A terribly rushed ending struggles to cleanly reset the status quo, and I’m not a fan of not knowing more or less how a story is going to wrap up with less than ten pages remaining. I also would have appreciated a deeper exploration of Tseetsk culture, rather than getting the bulk of it through through second- and third-hand accounts and the purview of one Tseetsk character. But the bones of the things are fairly sturdy, and a few characters get decent chances to shine—Picard and Deanna, notably, acquit themselves well in their abduction storyline. My socks were nowhere near knocked off, but there have certainly been worse efforts.

Our first Ten Forward Toast in a hot minute goes out to Yeoman Janet Kinsolving, whose grisly death in the novel’s opening pages kicks off the half-baked Riker anxiety arc. Testing the atmosphere on Amon-4 goes poorly for her when her skin literally boils right off of her face. Eventually her entire body cooks away to nothing. The tricorder can’t pick up everything; that’s why we wear enviro-suits, people! The incident leads to three days in quarantine, where Riker beats himself up and worries about having what it takes to lead people on dangerous missions while Deanna and Beverly look at him all askance.

This whole business gets swept almost completely under the rug before the story is even halfway over. Rather than being a result of poor writing, I believe this is more a function of the fact that Star Trek, as it was designed in days of yore, is not equipped to explore the effects of long-term trauma. For one thing, it doesn’t fit into Gene’s woo-woo idea that in the future nothing bad happens to anyone ever. But also, most 20th-century Trek is too episodic to encourage extended excursions into knotted issues like trauma and self-doubt. This is most clearly illustrated with Picard and the Borg: Picard gets assimilated and turned into a mouthpiece for the Borg and then leads the most devastating alien assault on Earth ever, and sure, he spends an episode afterward crying it out in his brother’s vineyard, but the series largely moves on from it after that, and somehow he’s still allowed to deal directly with them in episodes like “Descent” and go full ham on them when they try to time-travel to take out human deep-space exploration before it even happens. An idea like Riker getting the yips after an away mission gone awry is interesting, but the franchise’s infrastructure ensures that no lasting impression will ever take root.1Again, this is based on how Star Trek ran in those days. This will change entirely when we get to the relaunches.

Back to our unlucky yeoman, though: unfortunately, she’s treated somewhat shabbily the wake of her untimely demise. Riker’s main thoughts about her tend to revolve around how plain she looked. Congratulations, Yeoman Kinsolving: your enduring legacy is that your CO thought you were a butterface. Stay classy, Will!

I give Chains of Command 2.5 out of 5 concentrated pheromone ambushes. Bill McCay and Eloise Flood’s only outing attempts something Star Trek isn’t quite built to handle and winds up somewhat inert, though they manage to salvage it somewhat with some decent action in the final third and the occasional spicy jolt of horror. It has some decent framework and nuts and bolts, but ultimately they don’t come together in the most satisfying fashion.

NEXT TIME: Uhura signs and Chekov whines in The Disinherited