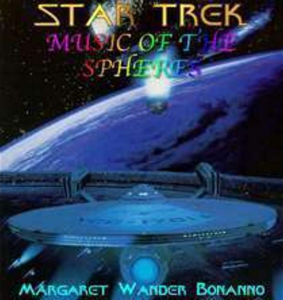 This week, we’re taking Probe from the top, once more, with feeling. The same peace conferences, the same song decoding, the same stories about alien whales, but now we march to the beat of a different drummer—a beat that adds a boatload of useless secondary characters and gives everyone dumber names. Is Sulu the worst spy of all time? Is there anything a single pill can’t cure in the future? And why won’t everyone just leave Scotty alone about his weight? All this and more in Music of the Spheres, the book where nothing matters but the music.

Music of the Spheres
Author: Margaret Wander Bonanno
Pages: 3241This number is based on the amount of pages in a PDF version of the manuscript converted in 2001, which you can download here. Page numbers referenced in the Nuggets section are based on this PDF as well. Personally, I found the PDF to be a far more comfortable and less resource-intensive means of reading the book than scrolling through it in Word or printing the whole thing out. The Word document clocks in at 238 8″ x 11″ pages.
Published: n/a
Timeline: Immediately following The Voyage Home
Prerequisites: Star Trek IV: The Voyage Home, Dwellers in the Crucible (TOS #25), some familiarity with Rihannsu conventions

Several Star Trek novels and authors have endured setbacks on their stories’ paths to publication, but none as tumultous as Probe, which we looked at two weeks ago. Briefly, a recap of that rocky road: Margaret Wander Bonanno pitched the idea of a sequel to Star Trek IV: The Voyage Home, which was met with enthusiasm and approved. When she turned in her manuscript, however, it was roundly rejected, allegedly due to excessive focus on original characters. At that point, the covers with her name on them had already been printed, so Pocket Books paid Gene DeWeese a flat fee with no royalties to do an uncredited rewrite of basically the entire thing.

Given that Bonanno long ago made her original manuscript available to anyone who wanted a glimpse of her vision, I thought it would be worth reading to answer the big obvious question brought about by the manuscript’s ease of acquisition: is Music of the Spheres superior to Probe? Answering that question is really the only compelling reason to check it out, and having now done just that, my answer is: not really, no.

Even though Music of the Spheres was nearly entirely rewritten, the two stories follow pretty much the same general track. Following the death of the Praetor, the Romulans spearhead a peace initiative, which may or may not be a genuine gesture, and they plan several cooperative events to this end, including an archaeological dig and a concert with representatives from both races. Meanwhile, the probe still wanders through space—although in this case it’s not trying to solve existential quandaries about its unusual experience at Earth, but rather more actively searching for a solution to the impending extinction of the superwhales from its home system—and after it destroys a Romulan planet, the Enterprise and the Romulan ship follow it to its homeworld in pursuit of one final attempt to help it find what it’s looking for.

As it happens, the two versions of the story each manage to represent the vastly different approaches to Star Trek writing that prevailed during their authors’ respective primes. Probe is more traditionally structured, yet highly prosaic—not neutered, per se, but certainly more restrained—while Spheres is more emotional, but extremely ramshackle, which may owe partly or even mostly to its nature as a draft, though I have a feeling it’d be more or less the same in a final published iteration. Music of the Spheres has a certain flair and flavor that evokes that untamed, piquantly fan-ficky mid-80s era of Star Trek literature, which has a certain sentimental value, but Probe succeeded more often than not in sanding down the rough edges of those hairier elements of Spheres and turning them into something that looks more like a professional product—sometimes for better, sometimes not.

Most of the greatest differences lie in the character disparities. Spheres somehow manages to feel like it simultaneously has both fewer and way more characters than Probe. There are certainly more Romulans in Probe, perhaps to that book’s detriment, as I sometimes had trouble keeping identities straight among the more shadow-operative types in the midst of all the subterfuge. But the personalities of the two principal Romulans, Rihan/Hiran and Tiam, are much better developed in Probe. The more trusting and gregarious nature DeWeese gave Hiran fits the Romulan commander better than the confusing back-and-forth games Rihan plays, and Tiam’s petulance and incompetence are played up and generally more amusing in Probe. Spheres also features a number of ancillary lower crewmen and civilians I had a hard time even beginning to care about, like Uhura’s subordinate M’Lynn Kittay, the dancer Anneke, nervous ensigns Ryan and Rosenzweig, and Chief Harper, one of those wunderkind jacks-of-all-trades who’s too well-liked and -respected by the main cast for this to be a credible first appearance. Their prominence is even weirder once you come to realize Chekov is nowhere to be found in this book, with no explanation given for his absence whatsoever.

Most notable among the cast are the returning characters Cleante alFaisal and T’Shael, the protagonists of Bonanno’s first Star Trek novel, Dwellers in the Crucible. Probe‘s solution was to create an amalgam of the two women named Audrea Benar, who has the backstory of both and the appeal of neither. In general, the two work much better as the central focus of a story, proving far more compelling when they don’t have to share an adventure with the canon crew. Having to find a place for them in the movie timeline smacks of a little too much effort, and I never really felt fully comfortable with the presence of either, though I think T’Shael’s material worked better than Cleante’s. If you really liked Dwellers in the Crucible, as I did, you may want to avoid Music of the Spheres to keep from tainting those memories.

As much as I hate to admit it, I can’t entirely fault Pocket Books for deciding this was a direction they didn’t want to go. The whole thing is too scatterbrained and too indulgent. Although the policy of cracking down on original characters is one I think really damaged some of the creative potential of Star Trek novels, there are none here that make any sort of particularly compelling case that that policy is a rotten idea. Music of the Spheres is a mildly interesting hearkening back to the way Star Trek novels used to be, and though that era produced some amazing Star Trek stories that really challenged the TOS canon in fascinating ways, this is a jarring reminder that that approach was not inherently better, but rather simply different.

I give Music of the Spheres 2 out of 5 Steinway grands. Probe had been made out in my mind to be this total desecration of a bold and original vision, but in all honesty, it’s kind of six one way, half a dozen another. Even if you vow not to hold its status as an unpublished work against it, it’s hard to let go of the sheer amount of messiness here, which is especially evident in side characters that don’t matter and are hard to care about. It is intermittently charming and it hearkens back to a time when Star Trek writing wasn’t so stringently regimented and edited to death, but there are both good and bad aspects to that. Only the morbidly curious and the hardcore completionist should feel compelled to check it out—it’s interesting, though truthfully not all that great.

NEXT TIME: Riker feels the burden of the Chains of Command

Music of the Spheres delayed