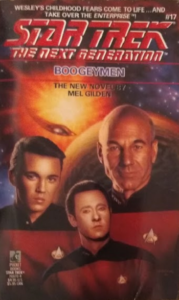 This week, Wesley takes inspiration from his childhood nightmares to conjure opponents for command scenario practice. But when a scientist friend of Picard’s is desperate to go off the grid, his plan coincides with Wesley’s holodeck creations in the worst way. How often do they update the replicator drink list? Isn’t the Kobayashi Maru supposed to be a secret? And who among the crew needs to brush up on their Microsoft Word shortcuts? All this and more in Boogeymen, the book that gives new meaning to “brain power”.

A little more than half of Boogeymen centers on young Wesley Crusher. The book opens with a personal log recorded by him, and he’s doing guided tactical practice exercises and watching documentaries with his mom and a first-contact specialist named Shubunkin. Up until now, he’s been content to train on fantasy scenarios, but he craves a real crisis and the chance to make real, impactful command decisions. Having clearly never heard a certain common adage warning against the dangers of such wishfulness, he has Data create him a holodeck opponent based on a system called the Borders scale and inspired by creatures that appeared in his nightmares as a child.

Meanwhile, the Enterprise stops at Tantamon IV to receive Eric Baldwin, exologist extraordinaire1(the subject of the documentary Wes watched, in fact) and old friend of Picard’s. Baldwin is a rock star in his field and makes all the women in his radius visibly horny, but he wants out of the game. He claims his discoveries and methods have made him several enemies, and an assassination attempt early in the book proves he isn’t just puffing his chest out. But it isn’t his desire to leave it all behind that’s the problem. It’s the lengths he’s willing to go to to make it happen that cause trouble, and though the Baldwin plot ends up crowding out most of Wesley’s page time and development, the two threads eventually dovetail intriguingly and demonstrate strong synergy.

Fascinated by Wesley’s increased interest in command and tactics, Picard joins Wes in the holodeck, ropes Data in as well, and boots up the Kobayashi Maru with Wes’s eponymous boogeymen loaded in. It goes about as well as anyone would expect, but when the party’s over, the boogeymen won’t leave. Wes, Picard, and Data try to, until a few repeating loops cause them to realize they’re trapped; their journey to escape the confines of the holodeck is one of the most surreal and enjoyable parts of the story. After Data crashes the holodeck by exploiting a microscopic bit of lag, Wesley largely exits the story, but the boogeymen remain, becoming more and more dangerous the closer the crew gets to a solution.

Boogeymen is the first of four books we’ll be looking at by Mel Gilden, who in addition to a few original works has extensive histories with tie-in media and the young adult genre. The latter in particular goes a long way toward explaining this book’s general vibe. Boogeymen starts out with the sort of extremely fundamental character description and conceptual exposition you’d expect from a series’ first episode, not its seventeenth novel. But beyond that, it feels very teen-oriented, attempting to service a demographic that Star Trek had to that point done very clumsily (when it did at all). Reading this book, it comes as virtually no surprise that two of the other three Gilden books are from the Starfleet Academy line.

Child empowerment is a tough row to hoe. When done poorly, it culminates in one of the most infamous Picard moments of all time. My least favorite episode of TNG is “Rascals”, the one where Picard, Guinan, Ro Laren, and Keiko O’Brien de-age to the precipice of puberty—perhaps most memorable as the final nail in the Ferengi reputation’s coffin, a humiliation so thorough and decisive it’s a wonder DS9 was able to rehabilitate their image at all, much less to the extent that it did. Other kid-centric episodes aren’t much better. And the less I’m allowed to expound on the sort of lazy Disney and Nickelodeon fare where kids live the life of Riley and run circles around the moron adults who only exist to suck all the fun out of their lives, the better for all of us.

What I’m getting at is, I didn’t expect a lot out of Boogeymen, to be totally honest. I can’t think of many things that sound less appealing at face value than Wesley Crusher’s monsters under the bed coming to life. But without an open mind, a critic is worthless, and I’m happy to report Boogeymen was worth the chance. The only other book to focus on Wesley so far, Peter David’s Strike Zone, was more interested in breaking him; this book, by contrast, treats him far more equitably, going out of its way to not put the weight of the world on his shoulders. Both Picard and the text emphasize that although Wesley created the boogeymen, their subsequent takeover is in no way his fault; additionally, the lesson about facing one’s fears head-on serves him well without making a huge deal out of his giant genius brain, and isn’t even exclusive to his character.

Boogeymen isn’t all peaches and cream. Gilden definitely made a few questionable story decisions, and it sometimes toes the wrong side of the wackiness line (e.g., when Data gets “infected” and is laid up with a blanket, a thermometer, and a hot water bottle). But I found it engaging and fun, and the more surreal elements, including the aliens of the week, are handled quite well for the most part. Of all the books to date, this one is likely the most pleasant surprise. Serves me right for setting my expectations too low. If you’re looking for something a bit more on the romp-ish side that still has decent stakes and neither patronizes nor overpowers a prominent child character, Boogeymen fits like a glove.

I give Boogeymen 3.5 out of 5 Randy Yeomen. If it had been even just a little tighter, I might have given it a 4. Had this been on TV, it probably would have been a fairly dopey episode, but as a book, it moves at just the right speed. The surrealist parts are done well, and the book retains a general sense of levity even as the stakes and intensity ramp up pretty hard. Boogeymen exemplifies the spirit of lighter, lower-stakes TNG while also being better than most examples of it. I found it rather entertaining, if not always totally solid.

NEXT TIME: Spock faces an old enemy in Legacy