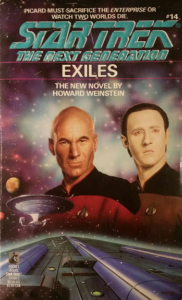 This week brings enough environmental disaster to make Captain Planet’s head spin. Two planets, each in possession of something the other needs, must make nice before explosions both literal and figurative wipe them out. But the clock really starts ticking when an old man shows up to get the kids off his lawn—by any means necessary. Could Worf pull off a rugby shirt? How far is too far when it comes to embarrassing Wesley? What is a panty raid at Starfleet Academy like? It’s the book you can’t tell is pregnant.

Exiles
Author: Howard Weinstein
Pages: 271
Published: November 1990
Timeline: Season 31The stardate given in the book is 44429.1. However, since the second digit of a stardate denotes which season of the show a story takes place in, this would put it during the fourth year of the show—more specifically, after Wesley leaves following the episode “Final Mission”. So Pocket Books just bumped it back a year for their official timeline.
Prerequisites: None
Not to be confused with: Exiles, the second part of the Vulcan’s Soul trilogy, published June 2006

Once again, the venerable Howard Weinstein returns to the fray, and it appears he figured since writing a story about an eco-catastrophe worked out so well last time, why not run with it again. Did he manage to catch lightning in a bottle twice? Well, sort of.

This time we’re dealing with not one, but two ecological disasters. One planet, Alaj, has made their own bed: their leader, Curister Zeila, can’t appear publicly without facing a dangerously angry mob, who will almost certainly spill over into real violence if they learn that the nefittifi, a bird essential to the Alajians’ cultural tradition and identity and due for an appearance in 22 days at the planet-wide Feast of the Awakening, has gone extinct. The other planet, Etolos, was just screwed by pure dumb luck: volcanic eruptions spewing ash into the atmosphere will force them to either relocate or die out.

Despite Alaj being members of the Federation, it’s Prefex Retthew of Etolos that puts in the call to have someone come help the two planets work their differences out. The population of Etolos—only about 200 thousand—comprises members of a movement originally from Alaj called Totality who didn’t like the way the Alajians were treating the planet and decided to head for literally sunnier skies. Each planet has something the other needs: Etolos knows Alaj doesn’t have any nefittifi left, and is willing to give them a couple of breeding ones if Alaj will let them move their conservation efforts to a neutral planet Alaj isn’t doing anything with. Much of the first part of the book is about making sure such a reconciliation is even feasible in the first place and carefully putting together a peaceful meeting between the two sides.

Exiles is a book with two distinct villains separated cleanly into tidy little compartments. Ozemmik, Retthew’s right-hand man, is a bit of a loose cannon who isn’t as keen on reconciliation with Alaj as Retthew. A reader who is even halfway awake will quickly suspect he’s up to no good—and he’s not. Seriously, it’s not any more complicated than that. He orchestrates the terrorist bombing of the nefittifi habitat on Etolos, freely and loudly admits to it, and spends the rest of the book rotting in the Enterprise’s brig. Retthew and Ozemmik have a friendship extending back to childhood that’s supposed to also inform their professional relationship, but Retthew drops him like a hot potato and the story never mentions it again.

With a half to a third of the book still remaining, more conflict is needed to fill out the remaining duration, and it comes in the form of Danid, who to this point has remained anonymous while his ship slowly but inexorably moves on a collision course toward Alaj. Danid is the sole remaining representative of the Bekeem, a religious group also banished by the Alaj after protesting their treatment of the planet. In the intervening five centuries, the Bekeem acquired some pretty heavy-duty colony ship technology via unknown means, and now Danid intends to bring the full force of it to bear on Alaj. Danid shares the ship with a computer named Nole; their relationship resembles a far more benign version of what Overkill and Dangerboat have going in Amazon’s The Tick.

The elements of environmental responsibility that distinguished Power Hungry are mostly downplayed here. Getting Alaj’s environment back on track is not emphasized as much as brokering peace with Etolos, acquiring breeding nefittifi, and heading off the incipient Danid threat. There’s also more humor in this book—though the jokes, such as they are, rarely land—as well as a “romantic” subplot between Deanna and the nefittifi caretaker Robbal that’s so chaste it’s kind of adorable. There’s more to keep it from getting too depressing and heavy-handed, but it also dilutes the focus somewhat.

That doesn’t mean Exiles is bad—it’s just a little more scatterbrained. Weinstein is still at this point the only writer in the novelsphere attempting to play to Star Trek‘s great strength as a vehicle for social commentary, which will continue to be worth no small amount of points in my mind as long as an author doesn’t totally screw it up. Despite that, I’d be lying if I said I didn’t hope his next effort travels a different direction. Two books don’t make a pattern, but I don’t want material of this nature and weight to start bringing diminishing returns. 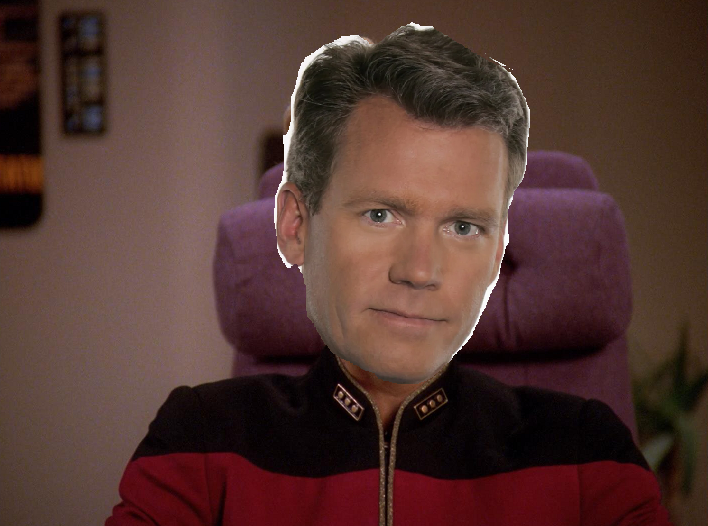 “Hello, Geordi. Why don’t you have a seat right over here?”

I give Exiles 3 out of 5 nefittifi. While it doesn’t pack quite the social conscience punch that Power Hungry did, and is a little sloppier overall, it’s still a perfectly serviceable and decent book. You get more than just the relentlessly dour picture of a planet on its last legs, but that doesn’t necessarily always work to the book’s favor. There’s a lot going on here and most of it is either watered down or doesn’t have the effect Weinstein intended. Nevertheless, I liked it just fine.

NEXT TIME: War is hell in Home Is the Hunter