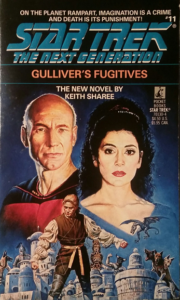 This week, the Enterprise finds a recording marker from a long-lost ship, but when they seek information from the authorities of a nearby planet where works of fiction and acts of imagination are capital offenses, they get a bunch of run-around from a dude with a big gnarly scar. Soon, Picard gets his brain wiped, Geordi is in charge of protecting the ship from a horde of floating sentries, and Troi falls in with a band of cosplaying rebels while fending off some hellacious nightmares. Will Data’s poetry catch on? What is Worf keeping so tightly under wraps? And where can I get a copy of The Riker & Timoshenko Sessions? It’s the book that’s doin’ a little thing we call three-toed minty fresh logo tissue.

Following a brief interlude of mild importance where a man gets arrested for possessing contraband—which is to say, pages from Gulliver’s Travels—we check in with Counselor Troi, who slips into some kind of fever-dream-cum-vision-quest while looking something up on the computer. It is in fact a pretty doggone trippy sequence, and it freaks Troi out enough to ask to be relieved of duty for a while; Dr. Crusher agrees to monitor her vitals and tells her to not eat the brown acid and to stay off the towers.

While Troi tries not to slip back into Nightmare Land if she can help it, the Enterprise finds a recording marker from a ship thought lost for the last decade: the USS Huxley, commanded by explorer extraordinaire Captain Alfred Bowles. But the nearby planet, Rampart, isn’t forthcoming with help, even attempting an attack. Rampart was colonized by humans in the 22nd century who wanted no part of things like fiction, imagination, fun, or creativity, and so outlawed all of them. Picard allows Crichton, head of the planet’s Cephalic Service, to board the Enterprise with some ominous floating robots colloquially called “one-eyes” and scan for “plague”, by which Crichton means all the aforementioned stuff Rampart hates, and the Enterprise is lousy with it, considering they have every work of fictional entertainment known to the galaxy downloaded into their ship’s library.1They only watch and listen to things made before 1960, though.

Inevitably, things go belly-up, but what’s surprising is how quickly the avalanche buries them. Crichton and the one-eyes capture Picard, and Riker and Data both get laid out during a planetside rescue attempt. Only Troi escapes, falling in with a rebel group that lives underground and seeks to preserve works and ideals of imagination and creativity, even going so far as to name themselves after various cultures’ mythical characters. These people are into some pretty deep cuts, literature-wise; despite Star Trek‘s inclination toward high culture, it’s not often I feel intellectually outclassed by it, but I’d be spending a sizable chunk of time on a wiki crawl if I were to look up everything in this book I didn’t know anything about.

There’s a fairly even spread of coverage among the ensemble, but Troi pulls out to the lead as the “main” character of this particular story. Dealing with both the strenuous effort of not giving herself over to her crazy nightmares and the delicate balance of tagging along with the rebels but not actively aiding their cause, she’s got more than a full plate in this adventure. As Troi plots go, it’s slightly above par, though I personally could have used a little more of the Picard side of things, especially more detail in his transition from capture to full brainwashing.

Most one-and-done authors land on one of two extreme sides: either you can plainly tell why they never wrote another Star Trek novel, or they did a good enough job to make you mourn the lost potential. Sharee is one of the few to land somewhere in the middle. This book often smacks of laborious effort. For example, I think the show came closer to accurately imagining how Data would write poetry largely by not overthinking it so much. I also thought the vocabulary was a little more elevated than normal, but that may just be me. This book is straining really hard to be something lofty and high-minded, when the truth is you can’t really force that kind of thing out of Star Trek; it’s better when it happens naturally. I wouldn’t be surprised to learn that the writing of this book and possibly also the publishing process took a lot out of Sharee.

One thing Sharee did very well in his only outing was create spectacular original crew members that both you and the cast want to get to know better. A security officer named Timoshenko makes a brief but memorable impression (more on him below). Wesley tries to ingratiate himself to an ensign named Shikibu, who risks being a little too “inscrutable Oriental” but knows her way around a bow and stands up quite admirably to the one-eyes. But perhaps the best of the batch we get here is engineering officer Dorothy “Chops” Taylor. Like Geordi, she’s blind, but she “sees” differently, using metallic sensor tips on the ends of her fingers. Chops gets a full two pages of backstory that I wish I could just reprint in their entirety, and which make you want an entire book about her. She’s leaps and bounds ahead of the likes of Obo.

I read Gulliver’s Fugitives not long before starting this site. I didn’t like it very much at the time, but now with the entirety of what came before it under my belt, it’s a little easier to appreciate how hard it’s trying, and I think it deserves some points for that effort. The villains have an inexorable relentlessness that I would say merits mildly favorable comparisons to the Borg, and it’s even got a twist I confess I didn’t see coming. Alas, I need to wrap this review up, because this book has made me feel very multi-culturally inadequate and I have a laundry list of ancient legends to go brush up on.

This week’s Ten Forward Toast goes out to Yuri Timoshenko, a security officer who sacrifices himself in the line of duty for Riker, and who belongs to a highly specific category of character death I’m encountering more and more often that I’ll call Redshirt Whose Death a Senior Officer Gets Really Emotional Over Because They Had a Moment Once. In this case, Timoshenko was playing bass in a jazz combo with Riker and they got so deep in the pocket that Riker had the computer make a copy of the session for future listening/constipated-face air-jamming.

I give Gulliver’s Fugitives 3 out of 5 one-eyes. Keith Sharee acquits himself reasonably well in his only Trek novel. It’s got high aspirations and plenty of exciting action sequences, and it’s filled with wonderfully memorable original characters from the lower decks. Although the seams of the story show visible strain from the attempt to be profound and weighty, it’s always better to aim high than to not. I don’t think it’s an unqualified success by any means, but there have certainly been worse freshman attempts.

NEXT TIME: The fate of the Enterprise rests on the Doctor’s Orders