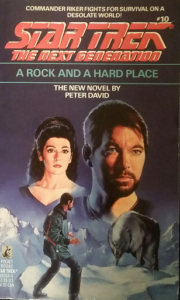 This week, Riker takes a temporary transfer to troubled terraforming territory. His seemingly unhinged replacement wants you to know how he got these scars, but he’s not much of a joker. While Troi tries to figure out the new guy’s whole deal, Riker ventures where the Wild Things are when some old friends of his go missing in the boonies. Has Galaxy-class life made Riker soft? Will anyone ever appreciate the chuS’ugh? Whose idea was it to let O’Brien into the poker game? It’s the book that somehow passed the psychological exams.

A Rock and a Hard Place
Author: Peter David
Pages: 244
Published: January 1990
Timeline: Early season 3
Prerequisites: One fairly major moment that springboards off the events of “The Child” (S2E1); otherwise, not really

Four pages. That’s how long it takes Peter David to introduce Quintin Stone, this week’s major original character. And that’s all he needs to assure the reader that A Rock and a Hard Place is going to be one of the wildest rides in Trek literature to date.

Riker gets temporarily reassigned by the top brass to a planet called Paradise, a terraforming project that’s running into a few issues. In the meantime, the Enterprise receives his temporary replacement, Quintin Stone, fresh off the Nimitz. Stone’s issues with authority don’t jive with his impressive service record, so Picard arranges for a chat with Stone and the Nimitz’s captain, Andrew Borjas. Stone plays it cool as the other side of a pillow and lets Borjas work himself into a conniption, making Borjas look like a raving loony who could use a week of shore leave or two, or thirty.

Stone is an absolutely electrifying character. He feels bused in from an entirely different universe.1The closest canon equivalent I can think of would most likely be Ro Laren. However, although she bristles against authority, she’s far more malleable, easier to work with, and much more amenable to Starfleet’s hopes for her than Stone would ever be. He cuts through the staid formality of Next Generation like room-temperature butter. I’m honestly a little shocked that the editorial regime of the time allowed a character like this to run free in their playground. Every time he entered a room or opened his mouth to speak, the hairs on the nape of my neck stood on end, like Oh no, what’s he going to do this time? He passes Homer’s Poochie test: “Every time Stone’s not on the page, the reader should be asking: ‘Where’s Stone?'” I’m not sure TNG could support such a wild card on an ongoing basis, but as a one-time jolt to the senses, he’s extremely potent.

Stone plays everyone to an extent, changing his story about where his myriad scars came from to elicit maximum sympathy from a given listener, but he puts Picard in particular through the wringer. First, he doubts whether Data and Wesley belong on the bridge, and when Picard vehemently argues that they’ve proven their bridge-worthiness by their actions, Data somewhat incredibly defends Stone, noting that his suspicion is far from unusual compared to others’ first impressions. Then, in the conference room, he nails Picard to the wall for implying that he doesn’t trust Stone to handle a delicate diplomatic situation on the planet Culinan. Once in command of the mission, Stone tackles said delicate situation by threatening to kill the planet’s leader and himself. It works spectacularly: the people of Culinan depose the old leader and democratically elect a new one, and Stone becomes an instant legend among them, with statues already being erected in his honor. (They call him “Captain Stone”, much to Picard’s ire.)

You know how in shows with a maverick cop, they’ll say “he’s a loose cannon, but he gets results”? Stone seems hellbent on testing the direct proportionality of that cliche. He’s like a Kirk–Spock hybrid on PCP, as coldly logical as the latter, and practicing a distinctly darker flavor of the cowboy diplomacy favored by the former. In a one-on-one conversation, Stone argues, “You’re only as good as your results, Captain. Success forgives everything.” Although reluctant to admit Stone’s pretty much right, in private Picard is wracked by a self-doubt the book, incredibly, never resolves. Is he really the brilliant forward-thinking iconoclast he fancies himself? Is he actually standing in the way of progress? If Stone is one day remembered as a legendary genius, will Picard be seen as the stodgy old dinosaur who scoffed at brilliance that in hindsight will seem so obvious?

Throughout the book, the question of Stone’s sanity remains open, i.e., whether he actually is a psychopath or if he’s simply supremely in control of his thoughts and his will. Troi takes it upon herself to get to the bottom of just what exactly his deal is, a somewhat novel use of her talents that’s enjoyable enough to follow. That question is never posed directly to Stone by any crew member; it’s more of a nut for them (and the reader) to crack. Are actions and statements that look and sound insane at face value necessarily so? Is Stone really truly unhinged? He and David will keep you guessing all the way up to the very final pages.

We haven’t said hardly a word about the Riker side of things, so darkened is it by the long shadow of the Stone plot, but it’s not necessarily bad or lesser. There may be trouble in Paradise, and the assignment may be a drag, but Riker is at least surrounded by friends: an old pal from Alaska, Jackson Carter, runs the terraforming project, and married another of their old friends, and together they had a daughter, a mess of hormones who claims that age is meaningless when every day of your life is a tooth-and-nail fight for survival and demands Riker take her crush on him seriously. Riker never comes close to taking her up on her advances, something that ideally would be a given, but since Next Generation is no stranger to yuckiness with minors, it’s worth an audible sigh of relief.

Carter accuses Riker, at first somewhat playfully and then less so with each repeated occurrence, that living on a fancy-schmancy starship with amenities like artificial gravity and holodecks and carpeting has made him soft. Of course, Carter goes off to fix a busted environmental monitor and gets mauled by one of the carnivorous wolf-bears the terraformers refer to simply as Wild Things, so the argument quickly becomes academic. Afterward, Riker has to survive the snowy wilderness with a teenager crushing on him as his only companion, his performance at which should cast aside any doubts about how soft he is.

The Paradise and Stone plots finally dovetail in a final act that rarely goes the way you either expect or have resigned yourself to believe it will. By the time it winds down, you’re exhausted, but in the fun way, where like you went to a theme park and you got to ride more rides than you thought you would have time to. For better or for worse, The Next Generation doesn’t get too crazy too often, so when something (or someone) comes along and shakes things up, it’s often a rather refreshing experience.2Hence the primary appeal of Q episodes. A Rock and a Hard Place is no exception and an easy recommend.

This week we’re giving a tribute to a security officer named Scully, because even though he was a redshirt, Stone was nevertheless visibly distressed by his passing and took time when he died to mourn him, having read his personnel file and known a few things about him. Being as authors have more space to sprawl out and contemplate these sorts of things, it’s unsurprising that a book might take time where an episode couldn’t to dwell on exactly what a dead officer leaves behind, but it’s still a rare enough occurrence that it’s noteworthy when it pops up.

I give A Rock and a Hard Place 4.5 out of 5 chest scars. Stone sets a high  bar for original characters in Star Trek novels. A character monopolizing so much of the action would be intolerable if poorly written, but Stone is so riveting you always want to know what card he’s going to play next, and you never want the action to venture away from him for too long. I didn’t really think Strike Zone was all that, but A Rock and a Hard Place makes it very easy to see why Peter David is one of the Trek authors readers go the most gaga for.

NEXT TIME: Divergent visions of the Klingon mythos collide in Rules of Engagement