Atabis, a planet in the Klingon Neutral Zone, sends out a distress signal: a sleeper ship, the Compassion, is headed their way and prepared to land right smack on top of the capital city. The Enterprise, being the nearest Federation vessel, is dispatched to investigate, and the Klingons also send a ship of their own, the Pao Yar, helmed by the magnanimous Captain Klarr.

Rounding out the list of secondary senior officer spotlights, Uhura tags along on this one to help out with busted communications equipment. She joins the usual power trio, as does Captain Klarr, who wants to personally see to it that Kirk doesn’t get up to any funny business. Klarr, although suspicious, is overall pretty chill for a Klingon, willing to take a wait-and-see approach that’s rare in portrayals of TOS Klingons.1Though it seems odd that he would so openly admit to admiring the Federation’s style of diplomacy during a hail. This seems like the kind of thing that would set a Klingon crew to immediately planning a mutiny. His (unnamed) aide is another story: aggressive, accusatory, hair-trigger temper—much more your stereotypical Klingon of the time. Klarr and the aide always arrive in a room shortly after you do, their judgmental eyes waiting to pounce on any slip-up. 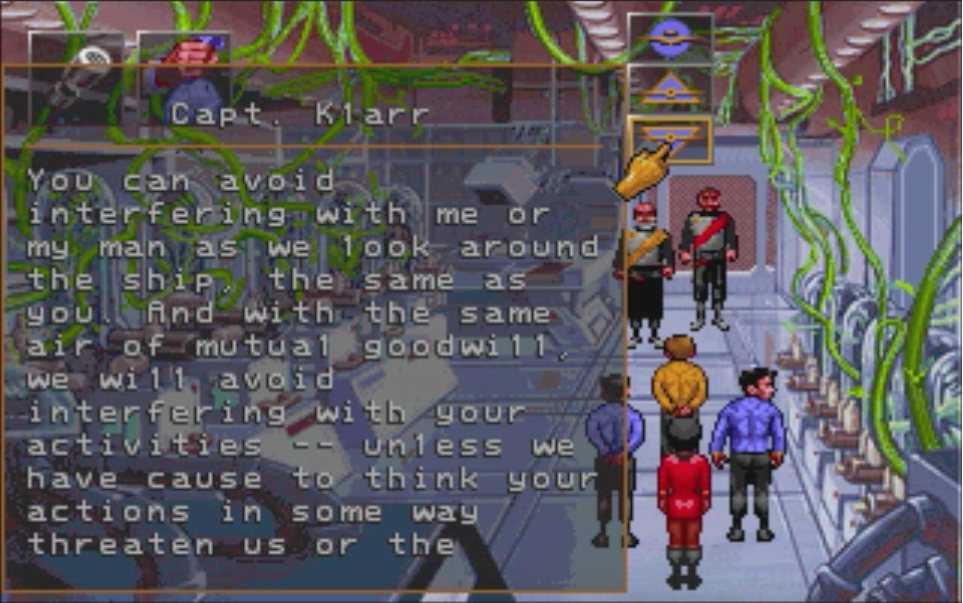 *points two fingers at his own eyes, then one at Kirk*

It doesn’t take long to realize Compassion is a rather ironic name for this ship. It’s populated with people displaying a wide range of obsessive tics, mental blocks, and emotional issues. Among the more important ones for the purposes of moving forward in the mission are Tuskin, the paranoid man who hoards the playroom all to himself; Rackaback and Gormagon, his steroidal enforcers; and Moll, who is overwhelmed by grief at the lack of nutritional food available for her son Stambob, and is the only person Tuskin trusts to provide him untainted food.

The food, among other things, is dispensed by the Phays, a sort of maternal computer intended to provide the citizens of the Compassion with all their basic needs. Somewhere along the way, however, its core became corrupted, and now it’s as off-kilter as any one of the people it’s supposedly taking care of. It pumps the food full of tranquilizers, is generally smothering in its overall demeanor, and has problems maintaining a consistent self-identity. 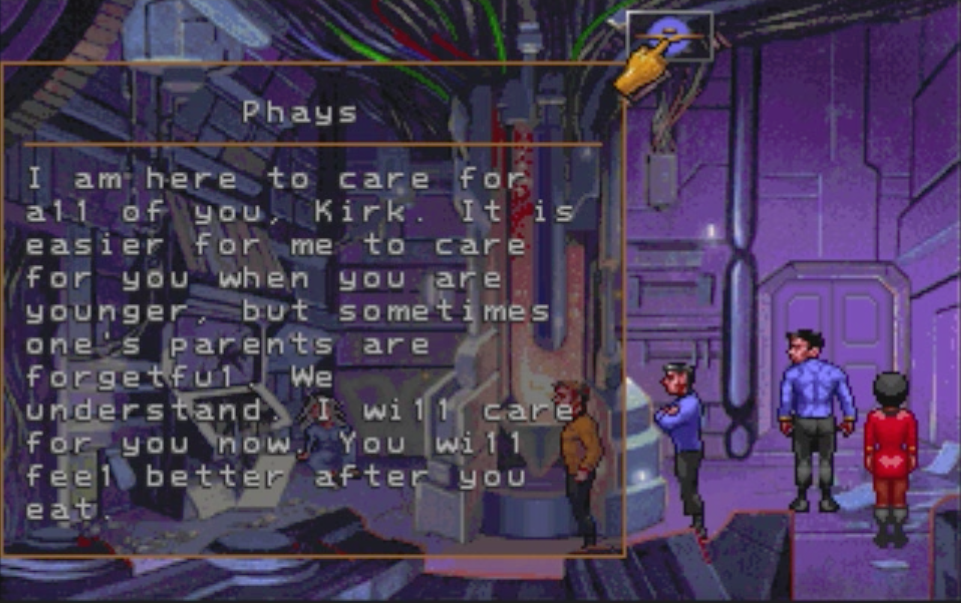 There’s no talking sense to the Mommie Dearest 5000

Scanning the playhouse in the playroom reveals something defying all known laws of space and time is going on back there. Of course, being the penultimate mission of the game, you might guess that it has something to do with the Brassica, since the amount of time left to wrap that arc up is winding down. And you’d be correct. After seeing through all their inconsistencies and run-around, the Brassicans finally decide maybe you’re ready for first contact after all.

There’s no way to know for sure, but I suspect this mission came near or at the end of the voice recording sessions, because the cast, particularly DeForest Kelley, have a tendency to skip over a lot of the more challenging and/or less essential pieces of information in the dialogue. Only Nimoy seems truly committed to nailing words like cyanodiphosphotrihydrous. By contrast, the voice acting by most of the inhabitants of the Compassion is outstanding despite its hamfistedness. Grinagog’s unhinged laughter, Tuskin’s high-pitched Matt Frewer-esque paranoia, and the strong GLaDOS vibe of the Phays are particular highlights.

“Though This Be Madness” probably requires the most running back and forth of any mission, and it’s often less clear than usual what you have to do next. But as setup for the final test, it’s a delectable treat, with much more miscellaneous flavor than the average mission, and no pressure of having to earn a good score to boot. 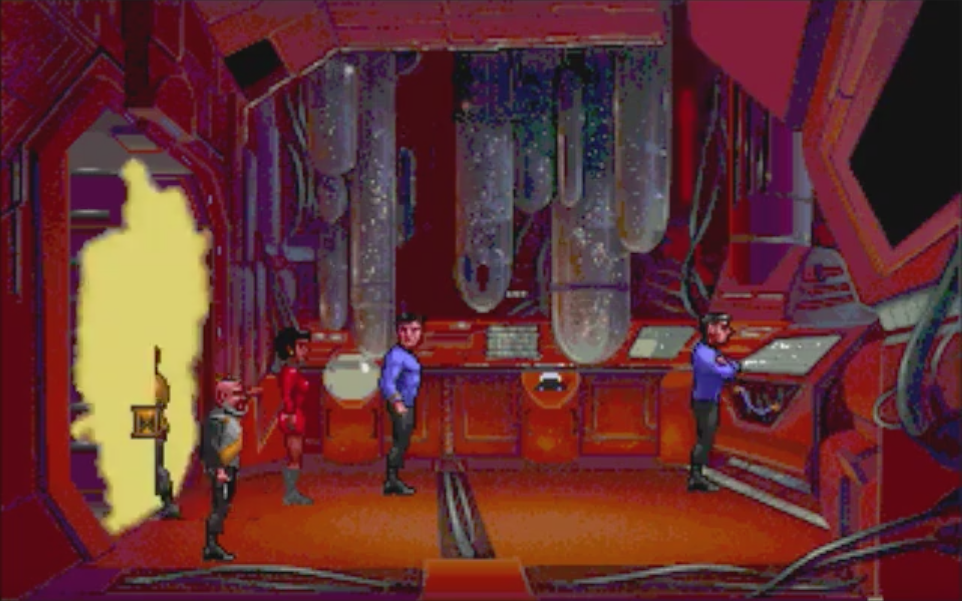 Into the breach once more, dear friends…

NEXT TIME: Meeting the Brassica face-to-face in “…Yet There Is Method In It”