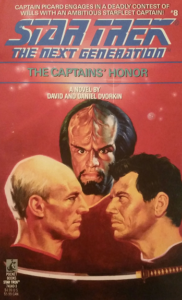 This week, a planet of peaceniks needs help controlling its feral cat infestation, and the Enterprise is one of two ships enlisted for ad hoc animal control. But when the other captain recommends an aggressive plan of attack, Picard thinks doing as the Romans do may not be such a great idea. What exactly is Admiral Delapole’s nickname? Is there a regulation against quoting regulations? How can a society based on a total lack of self-preservation maintain itself? It’s the book where you can totally tell it’s a stunt double.

The M’dok, a race of felinoid warriors, attack the Centurion, a Constitution-class starship. Despite the M’dok ship’s considerable size advantage, the Centurion prevails through cunning and ingenuity, and as the Enterprise comes screaming in at maximum warp to make sure they aren’t all dead, the Centurion’s captain, Lucius Aelius Sejanus, invites Picard over for a banquet. Picard notices an unseemly bulge in Sejanus’ lowerus regionus, which Troi clarifies is not of a “grateful to be alive” variety, but rather more in the “just killed a homeless person” vein.

The M’dok face widespread famine in their home system, and Tenara, a planet with a decentralized society and a philosophy of never engaging in conflict (personal or large-scale), presents a juicy target. Picard, of course, believes peaceful resolution is possible. Sejanus, however, wants to train the Tenarans in self-defense, teach them how to use weapons, build them defensive facilities, etc. Basically, he’s itching for war—which isn’t all that surprising, to be honest, given that he and his crew are subjects of the Magna Roman Empire.

The Magna Romans have had a previous encounter with the Enterprise—just not this Enterprise. If you recall your TOS, the Magna Romans appeared in the episode “Bread and Circuses”, where Kirk and company discovered their civilization on the planet 892-IV, which had developed a Roman Empire almost exactly like Earth’s, except in their case, the Empire never fell and remained the dominant society across the millennia. If you’re hoping for some down-to-earth deconstruction of this farfetched concept, you’re going to come up short, and frankly, David Dvorkin wouldn’t be the man for that job anyhow. You’ll have to take it at face value that about five years after Kirk’s visit, the Magna Romans joined the Federation, and much like how the Intrepid is staffed entirely with Vulcans, the Magna Romans have their own ship, the Centurion (nee the Farragut), on which they can comfortably observe the habits of their own culture. That those habits include warmongering, proselytizing, ostentatious social climbing, and military dong-swinging provide the story’s main conflict.

Most of this is filtered through the experience of an ensign named Jenny de Luz, whom Worf assigns to the landing party. de Luz starts off as sort of an audience surrogate, but before long, it becomes apparent that what she really is is a thinly veiled Tasha Yar substitute. Most of the differences are superficial: she’s a redhead instead of a blonde, she’s from “Meramar” instead of Turkana IV or New Paris or wherever, and she’s an ensign instead of a security chief, though she still has the workload of the latter.

de Luz quickly emerges as the “main” character of the ensemble, and it creates more awkwardness than it prevents. Like Survivors, The Captains’ Honor was clearly written (or at least in the process of being written) before Denise Crosby left the show, which is certainly liable to put a book featuring her prominently in a bit of a bind. That being the case, however, instead of scrambling to find-and-replace every occurrence of “Tasha” and “Tasha Yar”, why not just say it’s set prior to “Skin of Evil”? This seems like more of an editorial gaffe than a writer’s flub, but an already not-great author such as David Dvorkin needs all the breaks he can get.

While Ta—er, Jenny gets cozy with one of the Magna Roman officers and considers transferring to the Centurion, the rest of the crew tries to keep Sejanus and his men from launching an all-out war. Picard gets angry with Sejanus when Sejanus destroys a M’dok ship Picard totally had on the ropes, while on the surface the other senior officers have to combat the indoctrination of Tenara’s children by Sejanus’ sniveling nephew Marcus Volcinius, on top of the largely futile attempt to overcome the Tenarans’ total lack of willingness to defend themselves to any extent whatsoever.

Eventually, Sejanus gets too mad with power, bites off more than he can chew, and his plans start to crumble, at which point he and his crew beat a hasty retreat. Of course, the book just lets him slip away. Any sort of justice will have to wait for another day, and Dvorkin offers up some weak tea about how maybe Picard and Sejanus aren’t so different after all.1Actually, in a physical sense, that’s very true. Dvorkin cited Patrick Stewart’s performance as Sejanus in the BBC’s 1976 miniseries adaptation of I, Claudius as the inspiration for Captain Sejanus. He’s basically just Picard in a toga, which is weird to visualize as you read, especially while they’re together. Not that you’ll glean any of this from the cover, which portrays Sejanus as more of a Christopher McDonald-type with a thick shock of black hair, and for some inexplicable reason has a Japanese katana on it. In fact, almost everything in this book goes unresolved. Jenny de Luz’s Magna Romance and transfer worries are solved more by the fact that her beau is killed than by any definitive decision-making. The M’dok situation gets shelved entirely only to return in one brief sentence on the next-to-last page, which reveals that they are open to talks.2Though still presumably eating Tenarans in the meantime. The lack of resistance makes the meat more tender! It’s a messy end for a book whose problems start off small and get more and more magnified as the story goes on, though I nevertheless would call it the best of Dvorkin’s three Trek novels, which isn’t saying a whole lot.

I give The Captains’ Honor 2.5 out of 5 redheaded Tasha clones. David Dvorkin and his son Daniel do deserve some credit for being the first ones to try to bring TOS material into the world of TNG. The effort is laudable, even if they chose a rather forgettable episode to revive. But the generic-brand Jenny de Luz proves a frequent distraction, several characters are under- and/or misused, and virtually no aspect of the story concludes in a satisfactory fashion. This is his final Star Trek novel, but I’ll say it anyway: strike three, Dvorkin, you’re out.

NEXT TIME: Children ruin everything in The Cry of the Onlies