“Light and Darkness” is the second part of the game’s major story arc, and it cuts right to the chase: there’s some kind of distress signal coming from Onyius II, go check it out. The economy of storytelling is impressive. No drawn-out space battles, no jibber-jabber—simply straight to the action.

For this mission, you’re accompanied not by a redshirt, but rather a blueshirt: Mr. Jons, a genetic specialist. Like Mr. Ellis in the previous episode, Ensign Jons is rather outspoken, although not in the same fashion. His scientific comportment belies his penchant for off-the-cuff anecdotal assessment and off-putting unprofessionalism. He describes the planet surface as “creepy” and at one point notes that “the difference between this place and hell is flames”, and when you enter the building, he claims to sense something evil, “something that wants to imperil [their] souls”. In case it’s not obvious from these cherry-picked quotes, Ensign Jons is devoutly religious, a fact you will remember every time he goes off on a high-pitched nasal jag about the preciousness of life or the importance of defeating evil, which is approximately 2 to 8,000,000,000 times per screen. 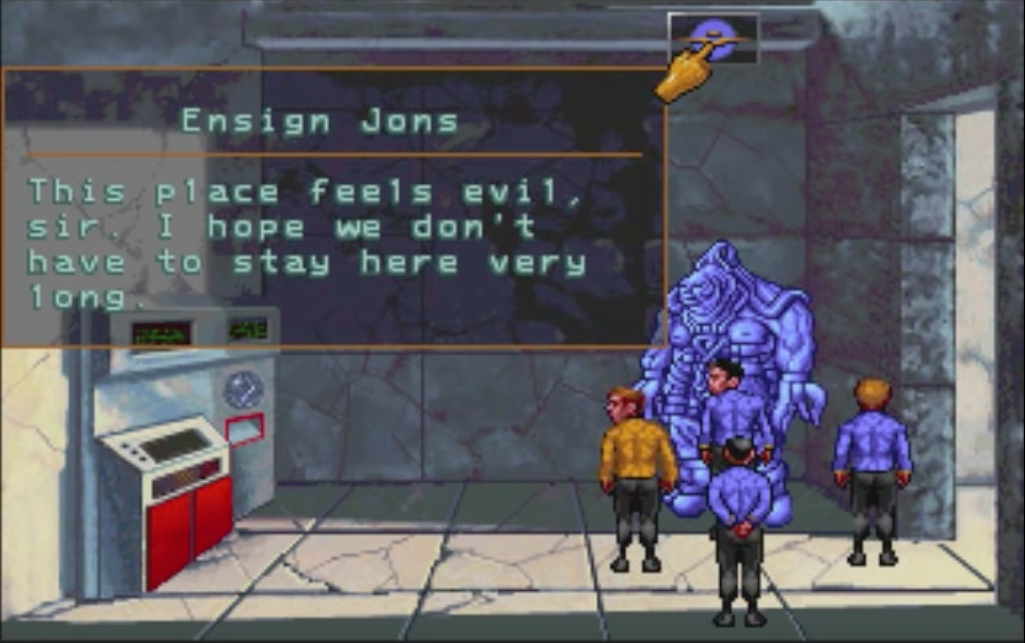 Inside, there are two rooms to the left and right of the entryway, each of which houses a machine that contains a colony of single-celled organisms and projects an image of a mythological being when activated. The organisms behind the glass have diametrically opposite compositions: one has a amazing metabolism but a poor reproductive rate, while the other breeds like rabbits but has virtually no metabolism. Only by convincing the mythical projections that the two organisms need to unite into one to combine their strongest traits can you ensure their continued survival.

Jons, unsurprisingly, provides the major moral dilemma for the mission. When asked to sequence the DNA of the two single-celled organisms, he does the Omegan sample just fine, but then clumsily pretends that something goes wrong while sequencing the Alphan sample. To move forward, you have to bring him around to the realization that you’re dealing with single-celled organisms with no capacity for morality without antagonizing or ridiculing him. The proper dialogue choices are somewhat telegraphed, but he’s such a whiner that it can be pretty darn tempting to serve him a little extra salt. 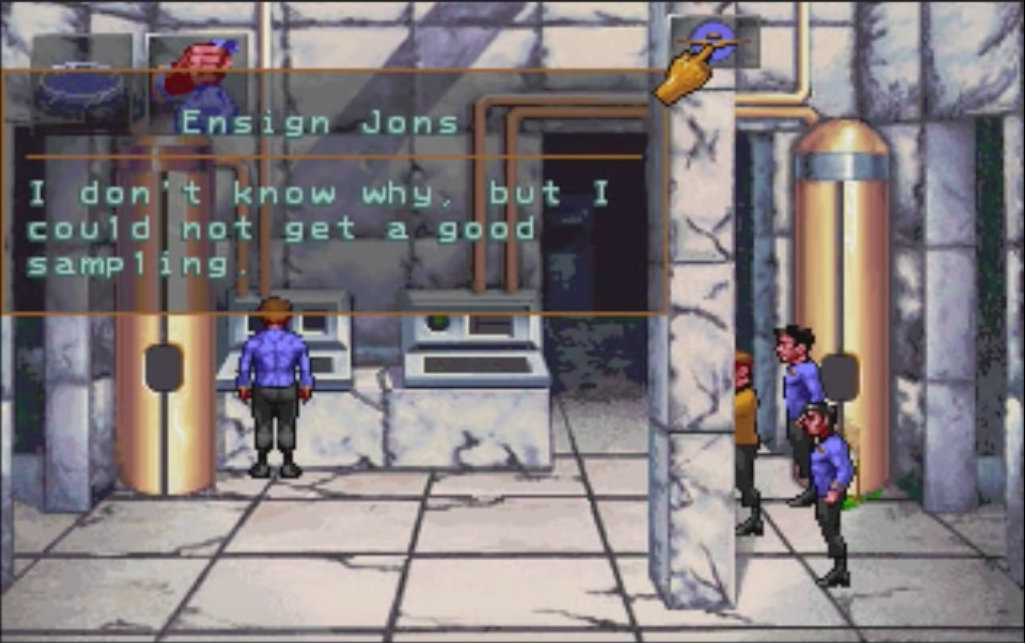 Interplay had explored this sort of territory previously. Star Trek: 25th Anniversary‘s first mission, “Demon World”, featured the Acolytes of the Stars. In that mission, you checked in on the status of a mountain that the Acolytes claimed was summoning demons to scare off people who approached it. Although religious, the Acolytes also greatly valued scientific discovery, but opted to stay over on the sidelines while you conducted your investigation. Juxtaposing a fear of demons with high standards of scientific rigor was a little weird, but never presented an obstacle. Here, it’s a Starfleet officer who’s bugging out about demons, and he puts his own agenda above the success of the mission, so it’s not only more than a little annoying, it’s dangerous and insubordinate as well. Overall, it’s a bit of a retread, but that can be forgiven, since the writer for “Light and Darkness” is something of a celebrity ringer (more on that below).

In the end, the testers come forward, identifying themselves by name for the first time: the Brassica. Essentially, you’re being tested on your ability to deal with cognitive dissonance: the “demon” is unusually calm and advocates for peace, logic, and reaching across the aisle, while the “angel” has zero chill and is bloodthirsty and self-absorbed. You’re also given a status update: roughly one in five test subjects make it as far as you have, with the not-so-fortunate ones either dying or failing for other unspecified reasons. But that’s not you: you’ve made it into the highest echelon of Brassican test subjects, and the way is clear for you to move forward into the final battery of tests.

“Light and Darkness” was written by Michael Stackpole, a celebrated author of tie-in literature, though Star Trek is not his usual milieu. As an author, he’s much better known for his work in the Star Wars and BattleTech universes. Where religious affiliation is concerned, he appears to be a skeptic, which explains his choice of subject matter and his approach to it. Although solidly written, neither of the Brassica-arc missions are paragons of excitement exactly, but having a setup as dry as the surface of Onyius II is acceptable when it results in the payoff we’re going to get in the game’s final two episodes.

NEXT TIME: Forcing a grin for the game’s toughest mission, “Voids”