For the game’s third mission, the Enterprise’s one-way ticket to Boredom Town, population 430 (scanning radiation clouds near Omega Corvus), gets canceled in favor of locating ships that have disappeared in the Delphi system. Upon arriving, Kirk encounters an old nemesis: Trelane, the omnipotent child that forced the crew to play with him in the first-season episode “The Squire of Gothos”.

This time, he’s piloting a triplane and calling himself the Baron of Gothos. If you play on the Federation Cadet (i.e., easy) difficulty, you skip the fight entirely. Otherwise, you get dragged into a protracted space battle, and even if you win, Trelane accuses you of cheating. The outcome is the same no matter what, and skipping it doesn’t adversely affect your mission score, which, while really nice, removes any incentive for putting effort into it. 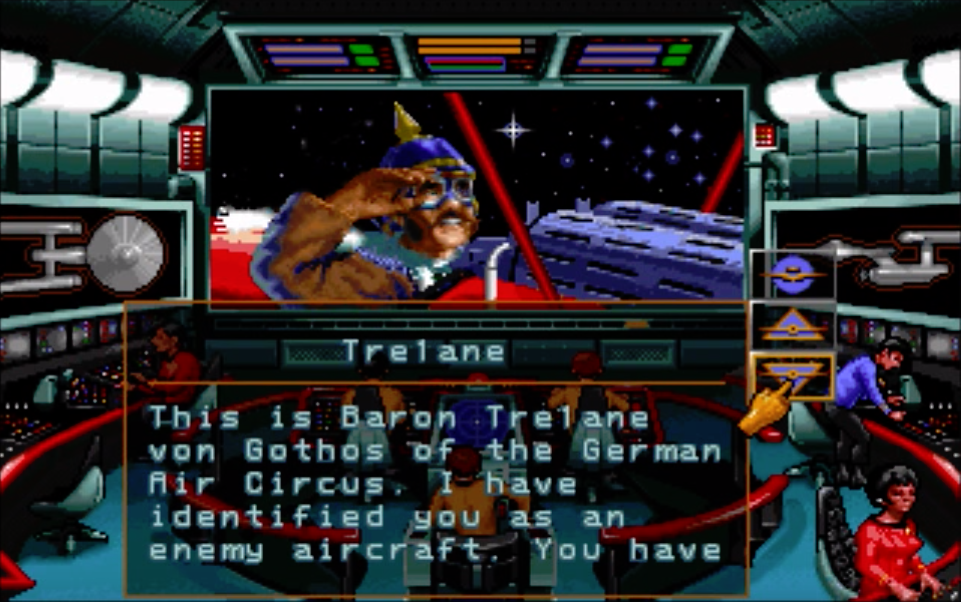 You could say Trelane is operating on a whole other … plane of existence. Thank you, thank you, I’m here all week. Be sure to tip your waitress. Try the veal, it’s the best in the city.

When you wake up, you find yourself trapped in a basement with some hay and a few crates of schnapps for non-humanoid company. After setting a fire to clear the place out, you venture out into the town and interact with the townsfolk, in the process working toward a comprehension of the long and short of your situation—viz., that Trelane has created a simulacrum of a World War I–era German village, indicating that his obsession with Earth’s history of war has moved up to the 20th century. Of course, given the superficial nature of Trelane’s interest, the village is filled with anachronisms and inaccuracies, a byproduct of his complete lack of understanding of the true grisly nature of war.

In “The Squire of Gothos”, Kirk destroyed a machine inside which Trelane had concentrated the power that allowed him to generate the space they were inhabiting, thereby temporarily gaining him and his crew some relief from the mad child. Here, scanning the premises reveals that Trelane’s power is distributed among a variety of objects, including a table clock, a blackboard, a locket, and his triplane. Since destroying them individually will allow the others to kick in as backup and give Trelane time to redistribute his power elsewhere, your primary objective then becomes finding a way to dispense with all of them simultaneously in an effort to get Trelane’s attention and confront him directly.

Besides locating Trelane’s power objects and determining a way to compromise them, you also have to deal with the rather bitter Lt. Cmdr. Ellis, security chief of the USS Zimbabwe. Whereas 25th Anniversary saddled you with a red rando in each mission, Ellis is one of only two non-senior Starfleet officers to appear in any mission in Judgment Rites, and his role is used to powerful effect. For Ellis is that rarest of creatures: a redshirt with a backstory. Ellis harbors a toxic grudge against Kirk because he feels Kirk allowed a friend of his, Ralph Garvin, to die on a landing party under his command. According to Ellis, Garvin was killed by “some blood-sucking cloud”, a direct reference to the episode “Obsession”.1Although no crewman by that specific name dies in the episode, a couple of unnamed redshirts could easily fit the bill. As lampshade hangings go, this is a rather dark one; “Obsession” has one of the highest redshirt casualty counts of any original-series episode.2In terms of onscreen deaths, “Obsession” enters a four-way tie for first with “The Man Trap”, “The Changeling”, and “The Apple”, each notching four. Factoring in offscreen deaths, “Obsession” moves down to second with five, or possibly six if you’re inclined to drop the hammer on an unspecified crewman whom McCoy describes as having a chance. The inclusion of offscreen casualties makes the champion by far “Where No Man Has Gone Before”, in which nine unspecified crew members die when the Enterprise crosses the galactic barrier. The total death count for that episode is 12, although Lee Kelso, Gary Mitchell, and Elizabeth Dehner can hardly be considered redshirts. (Source) Kirk often laments the fate of redshirts in passing in his captain’s log, but rarely if ever is he later faced with the subsequent effects of those fatalities. So not only do you have to worry about finding and rescuing multiple starship crews, you also have to placate this loose cannon and refrain from beating the tar out of him (which you can do if you give in to the impulse to lose your patience, at the expense of significant damage to your mission score). 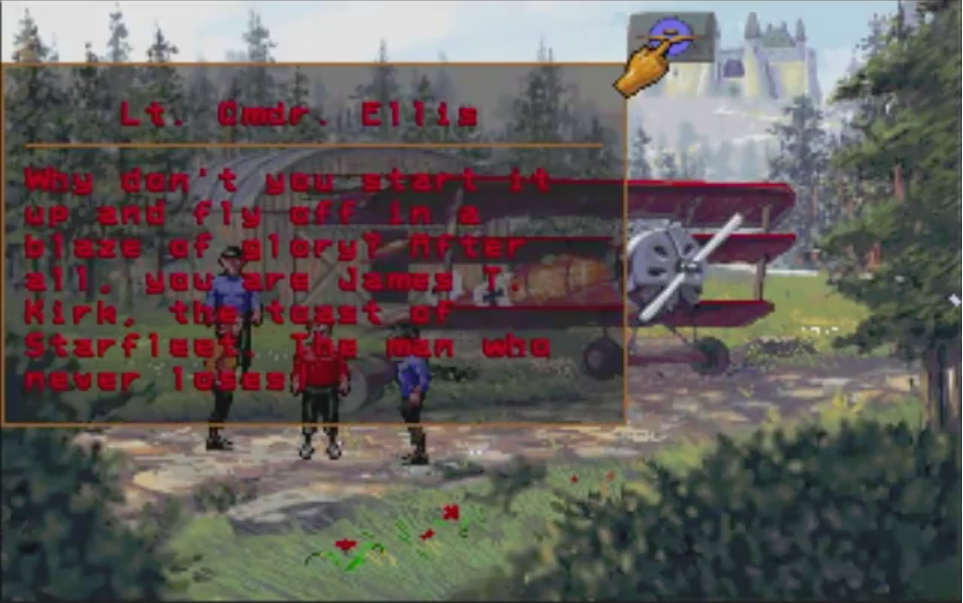 “No Man’s Land” is the one of the few missions where playing the voiced version of the game is a real treat. That’s because William Campbell reprised his role as Trelane for the occasion. Making the most of his return, Campbell doesn’t just chew scenery, he practically swallows it whole. In a game with better acting, it might have been distracting, but stacked against the muted and morose mumbling of everyone around him, it provides a much-needed infusion of excitement. His line reads are positively dripping with impatience and grating childishness, and it’s stunning the amount of petulance he was able to pack into his voice even as he was pushing 70. It’s a shame his gusto wasn’t a little more contagious, although there are, incredibly, noticeably more times in this episode when Shatner actually manages the proper inflection on a key line.

The only real knock against “No Man’s Land” is that it’s definitely one of the more drawn-out missions in the game. The space battle at the beginning can easily eat up at least ten minutes if you put real effort into winning it, and it also takes quite some time to walk back and forth fulfilling the favors the townspeople ask of you when you request certain things. If you miss a conversation that triggers the next step in the process, you can whittle away a fair chunk of time trying to root it out. If it didn’t lean so hard into the fetch-quest element, it’d be absolutely flawless. But it’s an excellent sequel as well as a powerful meditation on democracy, and if you’re excited for lore, character building, and a little bit of unflinching social commentary, this is likely to be your favorite of the non-story-arc episodes. 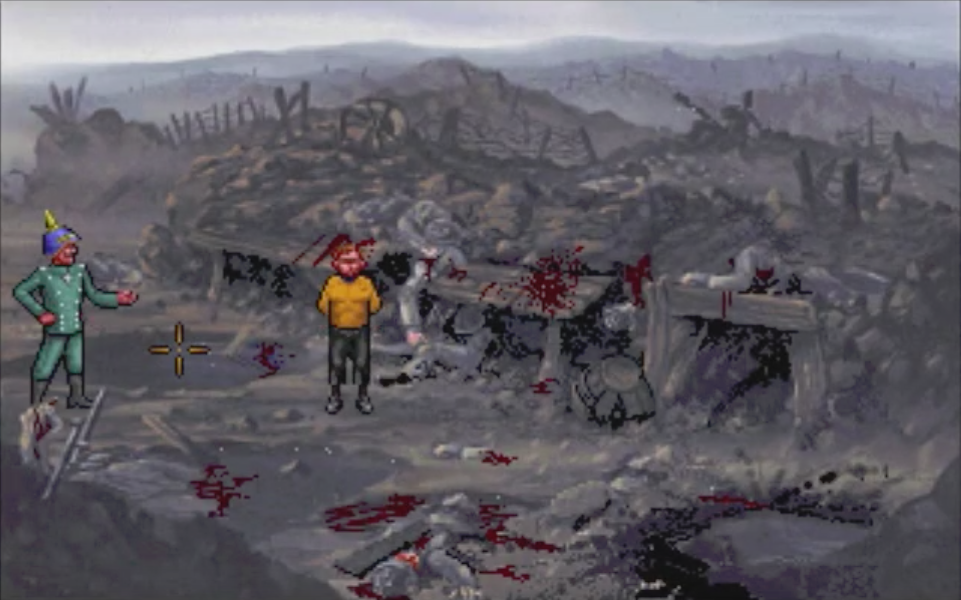 NEXT TIME: Gettin’ that old-time religion in “Light and Darkness”