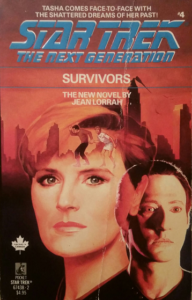 This week, Picard sends Tasha Yar and Data to survey a planet whose president has requested Federation aid to see if the lady checks out. Tasha gets abducted by an ex gone rogue who claims she betrayed him, but when he tries to lure her away from Starfleet and make it work again, she tells him they’ll always have New Paris. Meanwhile, it’s all she can do to not make a hash of the Prime Directive when the planet plunges into all-out war. Why does every woman who meets Data want to bone him? What would be in a What Would Riker Do? book? Do androids get tired of eating the same lunch every day? It’s the book that gives Tasha Yar the fair shake she always deserved.

Survivors
Author: Jean Lorrah
Pages: 253
Published: January 1989
Timeline: TNG season one
Prerequisites: Familiarity with certain early episodes is helpful, especially those with strong Tasha+Data connections, like “The Naked Now” (S1E3), “The Arsenal of Freedom” (S1E21), and “Skin of Evil” (S1E23)
Not to be confused with: “The Survivors” (S3E3), “The Survivor” (TAS S1E6)

By the time Next Generation novels started appearing on bookstore shelves, the first season of the show had fully aired and wrapped. Given that it wasn’t exactly the greatest season of television ever to grace the small screen, it’s unsurprising that the novelverse moved on it from fairly quickly.1Just to give you some idea of how quickly the novels move on to season two, we’re currently on number 4; Riker appears bearded on the cover of #6; and Pulaski makes the cover of #8. The most prominent casualty of that uneven first season was, of course, Tasha Yar, played by Denise Crosby. Crosby wanted out because she wasn’t getting enough good material; the writers were already thinking they had too many characters anyway; and so she got ignominiously Armus’d. Of course, Crosby would return intermittently, but for the most part, alas, poor Tasha, we hardly knew ye. So it’s nice that of the few novels to cover that first season, one of them ends up dedicated almost entirely to Tasha and her infamously hard-knock pre-Enterprise life.

It’s inevitable that Trek novels would start sharing DNA at some point, but the similarity of Survivors to previous books is especially striking. Plot-wise, it’s nearly identical to Shadow Lord (TOS #22): two crew members—in this case, Tasha and Data—get dropped off on a planet to look into the details behind a request for Federation help and end up getting embroiled in the planet’s political discord, then dragged into an all-out war. Structurally, Lorrah borrows from the Duane playbook—for a little while, at least—by alternating between the past and the present, except in this case it’s personal backstory that fills in the past rather than galactic history.

The book begins with Tasha’s early life on the war-torn colony, here called New Paris.2Predating, of course, the official designation of Turkana IV, which wouldn’t be set in canon until “Legacy” (S4E6). There’s a particular phrase that tends to jump out at people in Tasha’s backstory: “rape gangs”. Almost everyone looking into Tasha lore zeroes in on it, which is somewhat understandable given there was never all that much put out there for world-builders to run with, but it’s the kind of thing that very easily lends itself to lurid overemphasis. It should be noted that there are some rather brutal encounters in the early chapters, and for better or worse, Lorrah faces them head-on and doesn’t flinch. Fortunately, Lorrah finds a lot more to like about Tasha, and the elephant in the room is dealt with early and moved on from without excessive or gratuitous lingering.

After losing her elderly caretaker and her nameless cat, Tasha is rescued from New Paris by a security officer named Darryl Adin, who makes a profound impression on her as the first man in her life who treats her like a human being and doesn’t expect, uhh, favors from her. Adin encourages Tasha to join Starfleet, and when they both end up taking the same course on state-of-the-art security techniques, they begin to develop feelings for each other. Eventually, they get married and end up posted on the same ship, but after some Orions come to crack skulls for their dilithium shipment, Adin is accused of colluding with them. Following a quick court martial, Adin is black-balled from Starfleet, headed for a rehab colony and not so keen on Tasha anymore, feeling that she betrayed him by not siding with him.

In the present day, Nalavia, president of the planet Treva, has requested Federation aid in dealing with insurgents. With her hormones practically oozing through the viewscreen and every man on the bridge pitching a tent, Picard expertly resists the sexy and sends down Tasha and Data as impartial surveyors. While Nalavia macks on Data, Tasha gets abducted by a couple of men who she eventually learns are working for Adin, who somehow escaped on the way to rehab, became a rogue mercenary calling himself the Silver Paladin, and surrounded himself with a motley crew of crack mercenaries. Adin is working for an elderly warlord who’s putting up the last front of resistance against Nalavia and her ploy to gain absolute power via the manipulation of various tendrils of society, including but not limited to the press and the water supply. Tasha and Data get dragged into the conflict, and Tasha has to choose between her Starfleet ideals and the raw magnetism of her ex-husband.

Before they get separated, Tasha and Data spend a rather sizable chunk of one-on-one time on the slow shuttle ride to Treva becoming better friends. Even though she was acting under the influence of the polywater during the events of “The Naked Now”, Tasha nevertheless feels some real fondness for Data, not to mention guilt about telling him it never happened, on which point she isn’t clear whether he took it literally and erased the incident from his computer brain or just agrees not to dredge it back up the way a human would. Their scenes alone together where Lorrah is exploring and expanding on their dynamic are really nice, with a natural flow. As with any early TNG book, Data is prone to slipping into behaviors he would never manifest in the show, but Lorrah gets him more correct than anyone to date. Unfortunately, most of their camaraderie goes on the backburner when Adin figures back into Tasha’s life, and it never really fully comes back into the picture until the end.

Speaking of early TNG and some writers’ peculiar obsessions from that era, Data spends a lot of time being an irresistible sex magnet in this book. It’s the book that dares to ask: “How fully functional?” When it suits his purpose, he really turns on some bizarre (if effective) android charm, and he’s said to have 234 different modes of flirtation, which sounds pretty amazing to me, because I don’t even think I have one. No fewer than three female characters have serious sexual designs on Data, including Tasha herself, who seriously considers taking him to the bone zone on the shuttle ride back from Treva. Data also gets some backstory and development, but it’s largely overshadowed by all the times he gets uncomfortably flirted on.

One of the big problems with Shadow Lord was that it never directly faced up to the Prime Directive or the consequences of breaking it. Survivors at least makes a good-faith attempt to make it a major part of Tasha’s decision-making. The Prime Directive is a brambly topic that I only feel comfortable coming down definitively on one side or the other on in the most extreme and obvious cases. There are solid arguments both that Tasha and Data did or didn’t break the Prime Directive through their actions, and I applaud the book’s effort to engage with them. There’s much more discussion and hand-wringing about it than there ever was in Shadow Lord. If you can look past all the exclamation marks and breathless narrating that I’m coming to realize are ingrained attributes of Lorrah’s writing style, what you get is a book that really tries to get in her head and chart her growth from New Paris to Starfleet, and the Prime Directive plays a big role in highlighting that growth.

The final chapter of Survivors is a rather obviously tacked-on button, almost certainly hastily added after Crosby left the show, that quickly summarizes the emotional aftermath of “Skin of Evil” and gives Data a little bit more space to process, gain closure, and include a nod to Darryl Adin in the final arrangement. I’m not aware if there are any future books that try to add to the paltry stores of Tasha Yar lore, but if this is the only one we ever get, I’m pretty satisfied with it. I like it a good bit more than either of Lorrah’s TOS efforts, to be sure. Sadly, right as she’s starting to get good, we’ve only got one more book from her: the first TNG event novel, Metamorphosis. Let’s hope she goes out with a bang.

I give Survivors 3.5 out of 5 flirtation files. Though it’s brought down a little by the prurient obsession with Data’s fuller functionality and Lorrah’s typically histrionic writing style, it’s not enough to tank what is otherwise a valuable deep dive into a character we never got the chance to get to know that well, and it’s without question the best Next Generation book so far. If you’ve always thought the show never gave Tasha enough good material and have always wondered if there was any out there, wonder no more. If you’re at all sympathetic toward the character, you’re probably going to like this book, warts and all.

NEXT TIME: Spock goes for the Vulcan’s Glory

Shore Leave #13: The Butler Did It