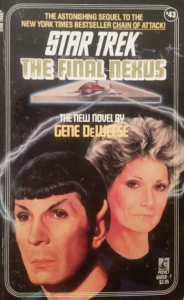 Just three weeks ago, Gene DeWeese laid this site’s first ever goose egg, and already he’s back in the saddle to bring us The Final Nexus, the sequel to his first Trek outing, Chain of Attack. There’s nowhere to go but up—or in this case, through, as the gate that sent the Enterprise billions of parsecs off course starts leaking space diarrhea that causes people to do some frightened pants-soiling of their own. What would the Enterprise do without Spock? Who’s that foxy silver mama on the cover? It’s the book that teaches us why the human touch is so important.

In Chain of Attack, the Enterprise unpredictably passed through a gate that transported the ship and its crew billions of light years and multiple galaxies away, and now that they’ve made it back safely, the Federation has begun studying those gates in earnest, trying to figure out how to work them on purpose instead of just stumbling butt-over-teakettle into them. The Cochise is on the case, but its captain, Jeremiah Chandler, suddenly comes down with the yips, filled with paralyzing irrational fear and totally unable to make command decisions. It takes a full two days for him to stop wildin’ out, during which time the Enterprise flies in to render aid.

Before long, various others start to feel the presence that gripped Captain Chandler. It can’t latch onto Spock, but it gets an ensign, who temporarily averts its spread by turning a phaser on himself. Kirk, rather than take a hypo and sit the worst of it out, toughs it out fully awake and alert for SCIENCE, while others feel it at varying degrees of intensity and even consciousness.

Spock theorizes that there’s an extra dimension between gate points that they might could reach if they scootch through the gate really slowly. His theory bears out, and after pulling himself and the rest of the crew back from blissful non-corporeality, the entity they’ve been sensing gives him a list of gate destinations as well as when to cross through to reach them. But the gates are malfunctioning, and the space-fear-diarrhea they’re leaking has begun to infiltrate Starfleet HQ, where Admiral Noguchi et al. want Kirk to wrap it up and stop messing with the gates ASAP. Follow the stupid orders and let the universe collapse, or ignore the stupid orders and do it their own way: you know which option the Enterprise is taking every time. So they juke the ships guarding the gates, continue their research, and decide to see if maybe they can’t communicate with this entity and talk things out while they’re at it.

If you’re fresh off of Chain of Attack and hoping to get more of the Hoshan and the Zeator, the alien races the Enterprise brokered a tentative peace between in that story, you’re going to be disappointed. This is only a sequel insofar as it expands on the concept of its predecessor’s universe-hopping gates, which I can’t honestly say I was clamoring for more of. For one thing, if you put powerful gates like that in your story, you run the risk of inviting comparison—most likely unfavorable—to the Guardian of Forever, which I grant doesn’t fully track, since that’s traveling more across time than distance, but nevertheless it’s stiff competition that you don’t want or need to be going up against. And Gene DeWeese, perhaps needless to say, is no Harlan Ellison.

The Final Nexus is a tough book to lose oneself in, mainly because so many of the principals the Enterprise contends with and learns about are eldritch and unfathomable, or at the very least a tad too alien to fully relate to. There’s the entity of the gates, of course, but Kremastor poses problems as well. The Enterprise meets Kremastor in a ship graveyard on the other side of the gate; by the time they find him, he’s fully integrated himself into his ship and spent 20,000 years sitting quietly to escape the entity’s notice, claiming to have a device that will destroy the accursed gates once and for all. Toward the end, they learn about the Risori, the so-called “creators” of the gates who didn’t so much create them as harness them, and who, it turns out, knew even less about them than what the Federation figured out on their own, resulting in frustratingly little net gain at the end of the day.

Eldritch antagonists are tricky to pull off, and for me personally they work best when they’re anchored to a human element—e.g., the Soviets in Ghost Ship. Of course, it’d be a little silly to ask aliens not to act so alien, but characters like Kremastor prove more than a little difficult to get behind, even with a dozen pages of no-dialogue exposition to get us up to speed on how it got in its current mess. Abstract entities and feelings can work, particularly when there’s a strong emotional component, but a whole book centered around figuring them out needs to really have a lot of skill and heart behind it to make up for the lack of humanity.

Speaking of the human elements, they’re not that exciting or memorable either. If you’re anything like me, you thought the older lady on the cover was going to be Amanda Grayson, but it’s actually an original character named Esther Ansfield, science officer and first officer of the Cochise, who ends up tagging along with the Enterprise once Captain Chandler becomes a useless gibbering monkey. Every now and then, DeWeese throws in a little more backstory or detail about her, so you feel like she’s going to have a huge impact, and then she turns out to be one of those Mira Romaine-type “oh, she’s just good at this sort of thing, that’s all” characters. She reads physical books! She joined Starfleet because she had the hots for Kirk! Whoopty-frig.

And so it is that Gene DeWeese extends his sophomore slump and once again fails to impress, though I suppose it’s something that he didn’t just outright face-plant like he did three weeks ago. The Final Nexus isn’t too awful when it comes down to it—it just doesn’t really give you anything meaty to sink your hooks into. Anything about Chain of Attack that screamed “sequel” is completely absent here, and it would have taken something a lot more substantial than this to justify one otherwise.

I give The Final Nexus 2 out of 5 leaky gates. Universe-hopping gates just aren’t that interesting to me. Counting our blessings, I suppose it’s something to be thankful for that The Final Nexus isn’t as aggressively offensive to the sensibilities as The Peacekeepers, but a big fat nothing-burger isn’t that much better. After an auspicious start, DeWeese-penned Trek stories are quickly becoming something to dread, but thankfully this time we get a lot longer break than three weeks before the next one.

NEXT TIME: Tasha Yar and Data show us how to be Survivors