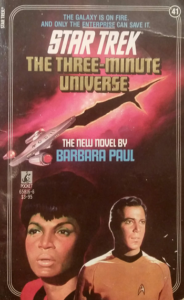 This week, an adjacent universe has been opened up by some aliens who got hit with the ugly stick, as well as the smelly stick, the loud stick, the yucky stick, and the no-touchy stick. But while their reign of terror and their slick new ship both seem pretty scary, the tables turn in the Enterprise crew’s favor when it becomes apparent that the babies are running the orphanage. Will Uhura overcome her fear of fire as suddenly as we learned she had it? Can one truly become desensitized to anything? And where I can get a billion CCs of that dream-DVR drug? It’s The Three-Minute Universe, the book where it’s all over but the puking.

Probes the Enterprise has sent to the Beta Castelli system are doing something probes don’t normally do: they’re melting. The heat has taken out the entire system, including Zirgos, the colonized world within. Fortunately, the Zirgosians colonized one world outside the system, Holox, so there are thankfully still at least a few of them left. But there too, Zirgosians are dropping like flies: their water supply has been poisoned and they’ve been enslaved into assembling a sleek new state-of-the-art ship for their captors.

And just who are the folks instigating all this mayhem? The Sackers, tall rotting transparent sacks of organs with little maggoty-type things squirming around inside them. The Sackers are offensive to literally all five humanoid senses. All previous encounters with them have resulted in dire illness. They smell (and thus presumably also taste) horrendous; the mere sight of them induces extreme nausea; their voices are so screechy and discordant, they cause deafness; and if they touch you, you get, minimum, a third-degree burn. Suffice it to say they have to be approached through heavy filtering if anyone wants to open a channel with them.

The Sackers capture Kirk, Uhura, and Chekov—and also, later, Scotty—and, after giving them equipment that will dampen the effects of being around them, rope them into helping them learn the ins and outs of their newfangled ship. After a Sacker crewman lets slip about an accidental environmental failure that killed everyone in the command ranks, the light bulb over Kirk’s head comes on and he realizes the ship is being run by the surviving children—and those children are fully prepared to carry out their predecessors’ mission to destroy the universe. The crux of the crew’s conflict from there on consists of misleading the Sackers enough to ensure their own continued survival long enough to gain access to the baryon reverter (the only device that can seal the universe rift) and convince them to use it.

Once they figure out they’re dealing with kids, the tables turn and the overall mood shifts to a sort of devious evil-hand-rubbing as Kirk, Uhura, Scotty, and Chekov take great delight in their subtle sabotage of the Sacker crew. Kirk gaslights the helmsman into thinking he’s doing a pitiful job steering the ship, by extension worrying the captain. Chekov sows discord by withholding a name from one of the candidates for navigator, something they consider a great honor to receive from one of another race and as great a shame to not. Scotty builds a non-functional Rube Goldberg machine that he claims is powering the ship and has the engineers study it closely. This part whips back and forth between all kinds of moods: hilarious, suspenseful, even at times a little heartbreaking. The Sackers never stop being so nice and accommodating, but they also have their vicious side when they feel their chain has been yanked too much, and for all their kindness, their mission is all they know, and they have (from their point of view) little incentive to abort it. It’s amazing that the book never goes off the rails, considering.

The Three-Minute Universe is keen to remind readers of something that can at times get lost among the gee-whiz trailblazing and humanoid casting constraints of TV Trek and which only authors who stay on their toes like Diane Duane seem to not constantly forget, which is that aliens can be pretty, well, alien. Its violence is often rather graphic compared to what we’ve read and seen so far1Franklin is without question the new holder of the dubious honor of most gruesome redshirt death., and severe trauma occurs frequently and without mitigation. Although it can be tough to stomach at times, it’s admirable that Paul came out swinging.

As villains, the Sackers can be both as cordial and accommodating and as terrifying as they are disgusting, and they can switch modes on a dime, making them one of the Enterprise’s more tenacious opponents thus far despite their age and naivete. It At times, that adorable naivete threatens to undermine their sinister side, but their inexorable commitment to carrying their mission out to its bitter conclusion keeps them a viable threat. The captured Enterprise crewmen show an endearing commitment to really getting to know aliens that at first impression seem so unknowable, and they make a lot of headway and learn a lot about this previously mysterious race, to the extent that it’s often a huge bummer to accept that they have to ultimately commit to their subterfuge. After all, as much fun as it would be to hang out and make friends, there is still a universe on the line.

One thing you might notice about this particular review is that the Nuggets section is a lot longer than usual. That’s because Three-Minute Universe is overflowing with the kinds of little ideas and character moments that pleasantly fill out the margins of a fictional universe. One major one that the Enterprise crew, especially Kirk, keeps tripping over is the Sackers’ tendency to effortlessly adopt any designation given to them by another person, leading to names like Babe, Pinky, Toots, Blue, Brownie, Jonquil, Rasputin, and Orangejuiceandwodka (no points for guessing who came up with those last two). It and the other small moments peppered throughout the book help leaven the impending cataclysm with a nice touch of humor and joy. They’re not all successful, but usually, the effort itself is sufficient to carry the day.

Strangely, as intriguing as its original ideas are, Three-Minute Universe has a tendency to flub the more established stuff. In particular, Spock is often given dialogue and portrayed in ways that seem slightly off and out-of-character, like on page 81 when he says he is “heartily glad” to hear the poison victims have recovered.2To Paul’s credit, she seems to have enough self-awareness to realize she’s not a great Spock-handler, because he takes a bit of a backseat to most of the main action. A mind meld is performed quickly and without ceremony or buildup, like it’s just something that can be turned on like a switch. There is also a tendency to intermittently forget about simple things, like the universal translator, that really make things a lot easier when one fully gives oneself over to the technobabble. This all might have been a bigger deal in a less enjoyable book, but the originality bursting forth like a force of nature goes a long way in smoothing over it.

Typically, when an author has only one Star Trek book to their name, I find it a red flag more often than not. I have to admit I was a little worried about The Three-Minute Universe going in. But it’s a thrill ride possessing both comedy and intensity in equal measure that never stops swinging for the fences. And it gives plenty of in-depth face time to the lower-billed bridge crew (except Sulu, though even he gets a few great moments), which even many books I and others consider great (including next week’s) often decline or forget to do. In general, all the main characters are served well—with the possible exception of Uhura in parts, whose fear of fire I’m all too glad to leave in the non-canon graveyard, since it’s too tacked-on and arbitrary to generate any pathos—and it’s always great to see them work together in as well-oiled a way as they do here.

If you’re looking for something different but not wildly or inappropriately so, The Three-Minute Universe is a real under-the-radar pick. It’s times like this that this project really pays off, making me discover a diamond in the rough when I might have otherwise passed over it based on a cover or a synopsis.

I give The Three-Minute Universe 4 out of 5 baryon reverters. Barbara Paul writes on her website that The Three-Minute Universe was incredibly fun to write, and that fun she was having really does shine through. While some foundational elements are a little shaky, the new ideas impress more than enough in both quantity and quality to make up for it. Your heart is in for a rollercoaster ride with this one. This one really took me surprise, in the best way. I’m really sad now that Barbara Paul didn’t get an opportunity to write more Trek novels. Her voice is one the franchise could have really used more of.

1-Year Fundraiser and Some Other Upcoming Stuff