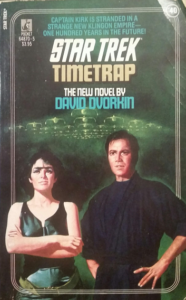 This week, Kirk disappears while helping a Klingon ship stuck in a storm and wakes up 100 years in the future, where it would seem the Klingons have turned over a new leaf. While they prepare to return him to his own time and groom him for his role in ushering in the Great Peace, Spock calls in all his favors to get to the bottom of what’s really going on. Does Kirk listen to himself when he talks? What does Spock have to do to get some respect around here? How can you make up something called “The Hole” and then not devote fifty pages to it? It’s Timetrap, the book that’s not-so-subtly trying to tell you “drugs are bad, m’kay.”

Everyone’s tired and ready for some R & R, but a distress call from the Klingon ship Mauler puts a kink in that slink. The ship appears to be flickering in and out of existence, but of course, Klingons gonna Klingon, and they would prefer nonexistence to receiving human help. Kirk himself beams over—rather foolhardily, when you think about it for more than two seconds—with a security detail to bail them out, and surprise, surprise, that’s when Mauler blips off the radar for good.

With Kirk out of the picture, Spock is forced to take the reins and make the tough decisions, like going to Starbase 17 for repairs instead of staying and searching for Kirk and potentially incurring the wrath of the Tholians, whose space the incident happened near. Even no-account OCs take the opportunity to dogpile on him; Lt. Ginny Crandall, sitting at the engineering post, puts the screws to him about it hard enough that it’s a wonder he doesn’t immediately confine her to quarters for insubordination. Spock has the most thankless job in this book, carrying out orders he knows are perfectly logical only to get jerks telling him “wow, some friend you are”, and his dignity and restraint only make me love him more.

Kirk awakens surrounded by Klingons who are acting mighty weird, which is to say, they’re being really nice and speaking fluent English. What the heck is goin’ on in this cartoon? According to Morith and Kalrind, the two Klingons tasked with acclimating him to his new temporal digs, he and everyone aboard the Mauler got flung one hundred years (or .1 Philip J. Frys) into the future by the magnetic-ionic storm. During his recovery, Kirk also learns that he brokered the Great Peace between the Federation and the Klingon Empire—a somewhat amusing happenstance, given the events of The Undiscovered Country—and he must be groomed to go back in time and perform his role so history plays out the way it’s “supposed to”.

Meanwhile, over in Original Character Corner, we’ve got the Tindalls, Elliot and Luisa. Elliot is an expert on a particular piece of equipment Spock suspects figures heavily into what’s going on, and Spock later enlists his help to just that end. Elliot Tindall is an extremely annoying and problematic character. Their first appearance together as a couple has him making these bizarre little racial jokes at her expense that are supposed to be “cute” but are extremely discomfiting. Aside from that, he’s extremely taciturn, has a bad temper, and doesn’t like talking about his past, which hinges on a disaster he survived that obliterated his home village of Devon, creating a massive crater called “The Hole”, the backstory of which is not explored to anything remotely close to a satisfying depth. Elliot’s characterization is handled so poorly that until it’s revealed he’s a Klingon spy taking medication that keeps his savage urges under enough control to successfully assimilate among humanity, he comes off as little more than a textbook abuser. Had the drugs been indicated early on and not kept in the pocket for a lame reveal, it might have been easier to get on board with the character and sympathize with his plight.

You may notice that I didn’t use the “time travel” tag on this post. That’s because no time traveling actually ever happens. It’s fairly obvious from early on that Kirk is being gaslighted by the Klingons on a massive scale, and most of the book is spent waiting for him to catch on, which he is maddeningly slow to do. In essence, the book works itself into a corner. Just two books ago, Kirk was incredibly callous toward Klingons; now he’s far too trusting. The questions he asks his hosts and himself should be setting off way more red flags, and it’s just not fun to see Kirk be so dumb for so long. It’s eventually explained that the drugs they’re pumping him full of to keep him physically weak also greatly increase his credulity, but that doesn’t make it any more satisfying. (Horndoggin’ on Kalrind probably isn’t clearing up his judgment too well either.) However, even once Kirk realizes it’s all fake, he’s at the mercy of the Klingons, so prior to being in close enough proximity to the Enterprise, what could he do anyway? It’s an all-around frustrating situation for the reader.

Dvorkin’s previous outing was The Trellisane Confrontation, which we covered way back at the beginning of this year. Timetrap is superficially a cleaner and smoother read, but it proves unable to withstand serious scrutiny the moment you start scratching away at the surface. Both stories involve Klingon attempts to subvert the Organian Treaty—apparently a pet premise of Dvorkin’s, though one he has yet to actually write a good story about. At 221 pages, Timetrap has a brevity that hearkens back to some of the Pocketverse’s earliest publications. That shortness is a double-edged sword: it ensures that the mediocrity doesn’t overstay its welcome by too much, but it also could have used several more pages to do more justice to many of its key ideas.

Timetrap isn’t without its strong points. Once you realize what the Klingons are doing to themselves to make this work, Dvorkin is able to elicit some real sympathy for Kirk’s handlers. But sympathetic vibes are something almost every other character in this book could have used a lot more of. I just didn’t feel like I was rooting for anything or anyone. Almost everyone involved is either too dumb, too horrible, or both. Combine that with the cruel tease of insufficiently explored lore and a “twist” that’s almost instantly guessable, and you’ve got a recipe for some thin gruel.

I give Timetrap 2 out of 5 obliterated English villages. This is a book that baffles and infuriates at almost every conceivable turn. Once you stop buying into the idea that Kirk has actually moved forward in time, which happens almost immediately, the book begins losing its power to compel you with its primary plot, and it’s not helped by the fact that it falls down on so many other fronts. The basic elevator pitch isn’t that bad; it’s just the execution that’s not up to snuff.

NEXT TIME: All aboard the Ghost Ship