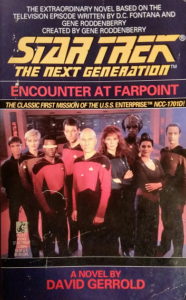 Ah, time to tuck in to yet another Star Trek adventure. I just love going on printed adventures with Kirk and Spock and all the rest. Just me and the NCC-1701, forever and ever. So what are they up to this week? Let’s see…

Wait a minute. “Next Generation”? Who’s this bald guy? And the one with the thing on his face? What’s up with the chalky pale guy? A Klingon in a Starfleet uniform? Bwaaaa? And since when do they let kids on the Enterprise?

Well, it took nine solid months, but we’ve finally arrived at the next step in our chronological journey: The Next Generation, which of course follows the voyages of the fifth incarnation of the Enterprise, the NCC-1701-D, as it continues exploring strange new worlds and boldly going and all that jazz. True to the nature of the decade in which it was conceived, The Next Generation offered more everything: more adventure, more drama, more crew members, more continuity, more engaging, more making it so—you name it, TNG brought it.

“Encounter at Farpoint” served as our introduction to the now-legendary crew. Jean-Luc Picard: brilliant captain, diplomat nonpareil, and lover of Shakespeare and Earl Grey (hot), though not so great with kids. Will Riker: outspoken first officer, loyal confidant, casual trombonist, and a run for Kirk’s credits in the ladies’ man department. Data: the android who longs to be human. Worf: the first Klingon in Starfleet, with all the baggage that implies and then some. Tasha Yar: chief security officer, she of the infamously nasty childhood on Turkana IV, which was spent mostly dodging rape gangs. Geordi LaForge: everyone’s favorite blind incel. Deanna Troi: ship’s counselor, half human, half Betazoid, feeler of feelings. And Dr. Beverly Crusher, chief medical officer and single mother to Wesley Crusher, precocious teenager and eventual hands-on trainee. Just as crucially, the very first episode gave us Q, whose trickster nature and often humorous presence belie the fact that he will in time be directly responsible for some of the show’s biggest and most important developments.

On the way to Farpoint Station, a brand spanking new trading post out on the edge of known space, the Enterprise is waylaid by Q, who informs humanity that they’ve overdrawn at the First Bank of Galactic Ambition and should turn around and head home before they get too big for their space britches. Picard responds by ramming through his energy fence and protecting the Enterprise’s civilian population from Q’s wrath by separating the saucer section, which takes several minutes, uses almost the whole budget for the entire season, and will require a crapload of paddwork later. Q then attempts to declare humanity hopeless savages in a 21st-century kangaroo court, but Picard demands to be tested on humanity’s current abilities and merits. Q says sure, why not, it’s not like you’ll solve what’s waiting for you at Farpoint anyway.

Meanwhile, Riker, Geordi, and the Crushers are waiting at Farpoint to rendezvous with the Enterprise and report for duty. Farpoint Station is a temperate paradise in the middle of a heat-blasted garbage planet; Riker wants to know how the Bandi built the base to such exquisite specifications, and also why things people want seem to appear out of thin air the moment they express a desire for them, and he wants a better answer from Groppler Zorn than “geothermal energy”. Along the road to that answer, the crew will get cozy and get to know each other as they grow into the gang we all know and love. (Well, the gang we all know, at this point in time anyway—love won’t come into it until around mid- to late season two).

Even at less than two hundred pages, Encounter at Farpoint has some padding, but that’s not to say any of it is egregious or unwelcome. Conversations tend to be longer and explore more possible outcomes, in the process actually explaining and justifying the crew’s trains of thought better than the episode itself. Elements such as Tasha Yar’s background and the Ferengi Alliance are explained at a depth that would have given a reader in 1987 a significant leg up going into the season ahead. It even made me feel more optimistic about the first season all the way up here in 2018, despite knowing how trash most of that initial run of episodes ended up being. Q is not as compelling in text, but that owes more to John de Lancie’s force of presence than any fault with the book.

Much more is made of Riker and Troi’s imzadi relationship, which is briefly mentioned in the pilot but comparatively downplayed. Book Riker has much of the prejudice toward Data that would soon come to largely inform the character of Dr. Pulaski. A number of tertiary characters exist in the book who don’t appear in the episode, such as an assistant to Dr. Crusher named Asenzi and a chief engineer named Argyle. One subplot involves a friend of Geordi’s named Mark Hughes, who feels his friendship with Geordi falling apart and resentment brewing as the senior officers keep plucking him for away missions and bridge assignments. Given Gene’s distaste for sustained interpersonal conflict within the Trek milieu, it isn’t surprising that this thread was cut and never heard from again, and to be honest, it won’t be missed.

David Gerrold wrote the novelization of “Encounter at Farpoint”. His most enduring contribution to Trek is the TOS episode “The Trouble with Tribbles”; you may also recognize his name of late for the discovery, which went viral, that he predicted the smartphone with mind-blowing accuracy (as Star Trek and its adjacent personalities are wont to do) in a 1999 article for the now-defunct magazine Smart Reseller. As far as Trek fiction, this was his only work for Pocket Books; he wrote The Galactic Whirlpool in 1980 when Star Trek novels were published by Bantam Books, and also wrote introductions to a few other Bantam-published TOS adventures, like Stephen Goldin’s Trek to Madworld and Kathleen Sky’s Vulcan!.

I think he did a fine job with Encounter at Farpoint. It has in both forms held up decently, the book maybe ever so slightly a teensy bit better than the episode. Amusingly, I often found the book to be histrionic in places where the episode managed to exercise restraint and more muted in spots where the actors went ham. But it gallops along with alacrity and doesn’t overstay its welcome, making it a fine entry point into a new series.

I give Encounter at Farpoint 3 out of 5 separated saucer sections. David Gerrold did a pretty good job with what I would consider a somewhat thankless task. It doesn’t read nearly as disconnected from the final televised product as I expected, given the reduced synergy of the era in which it was published. I wouldn’t call it essential by any means, but completionists may appreciate much of the supplemental exposition and find the characters and plot threads that ended up not making it into the episode of academic interest.

And with that, we are officially off to the races on TNG. We won’t get to the numbered books proper until the end of August, so in the meantime, replicate yourself a cup of Earl Grey and settle in for one last run of consecutive TOS tales.

NEXT TIME: J.M. Dillard returns to the horror well to slake our Bloodthirst