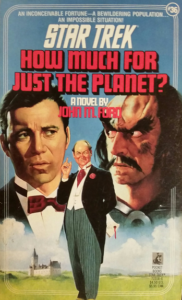 How Much for Just the Planet?
Author: John M. Ford
Pages: 253
Published: October 1987
Timeline: Circa season 2
Prerequisites: None

A tiny mining freighter discovers a planet with record amounts of dilithium deposits. The Federation and the Klingon Empire get wind of it nearly simultaneously, and suddenly it’s on like Donkey Kong. By the parameters of the Organian Treaty, whoever most successfully develops the planet’s resources gets to lay claim to it.

But what do you do if you live on the planet and you don’t want anyone carving up your private planetary paradise? If you’re the Direidians, you roll out “Plan C”—which is to say, relentlessly screwing with the intruders in a wacky, elaborately constructed farce straight out of a Preston Sturges film.

Suddenly, Kirk and Direidi ambassador/pseudo-old flame Charlotte Sanchez get caught up in a convoluted plot to help a couple get back together. Bones and Sulu go off hunting treasure and end up fulfilling a “prophecy”. Uhura and an officer from the Fire Blossom named Aperokei (aka Proke, not to be confused with the excellent browser game of the same name) get framed for the death of an Andorian and have to rely on Proke’s knowledge of old Earth film noir tropes to escape their bondage. Scotty and Chekov defend the Enterprise’s honor—on the golf course. And the poor bedraggled crew members of the mining freighter that found the dilithium in the first place just want some decent directions to civilization after they crash-land to evade the Klingons.

Do not attempt to adjust your dial, and throw out every metric you have for analyzing Star Trek novels, because John M. Ford’s How Much for Just the Planet? (hereafter How Much) is a comedy, full stop. Hijinks ensue. Misunderstandings pile up. Characters randomly burst into song. Pies get thrown in faces. Pick any synonym for “crazy”—nutty, zany, goofy, etc.—and it will fit this book like a glove. It’s all quite the spectacle … and that’s part of the problem.

Musicals are supposed to be a visual and auditory treat for the viewer. Trying to capture those sounds and kinetics in a book is like trying to light a wet match. There are certain things I as a reader can reasonably be expected to bring to the table—e.g., prior familiarity with Star Trek characters and concepts, as well as an open mind to unusual formats or deviations from the norm. Manic energy, however, is not typically something I’m prepared to supply for any book I read, let alone a Star Trek paperback.

I also feel the medium of text does a disservice to the songs Ford wrote. Not being terribly well-versed in musicals, I could only intuit the melody of one song just by reading the lyrics (the one based on the Rawhide theme). I assume all the songs in the book are parodies of and/or homages to actual compositions, but I don’t know well enough to make any strong assertions about it. So after a while, I just began skipping the songs entirely, finding it aggravating and tiresome to slog through lyrics I couldn’t match to music.

That said, I suspect what’s closer to the truth is that Ford’s song work here is actually pretty clever and I’m just too much of a philistine to properly appreciate it. That’s the dilemma I face in having to review How Much: it’s clearly operating on a level way outside my wheelhouse, so I don’t feel I can speak authoritatively on it. Nonetheless, its day has come, and this whole website was my bright idea, so I must render some sort of judgment, ready or not.

I will say this: it’s certainly ambitious. How Much follows three ships’ rosters of senior officers, breaks them off into several smaller groups, and never loses track of any of them for very long, which is pretty impressive. Also, nearly every Enterprise bridge officer (except, surprisingly, Spock, who probably wouldn’t be much fun in this situation anyway) gets a healthy amount of page time and active participation, which is more than many recent books both excellent and execrable can claim.

But in the end, I think it’s just not for me. Without any visual referents or kinetic action, I was mostly just bored. If this is the kind of thing you already possess the mental tools and wherewithal to make come to life for you inwardly, then you’re liable to enjoy it immensely. But it’s not for everyone, and seemingly by design. It’s easily skipped, but I also wouldn’t necessarily recommend not checking out—if anything, the sheer weirdness alone may overwhelm your curiosity. Just know what you’re getting into first.

I give How Much for Just the Planet? 2 out of 5 pies in the face, though your mileage will almost certainly vary. Sometimes you come upon a work and you get the feeling that whoever made it only cared about entertaining a small clique of close friends, and anyone else’s enjoyment was entirely incidental. I for one tend not to enjoy sensing that my pleasure was not a high priority for the author. I feel confident saying Pocket Books would never indulge a whim like this today; the question is whether they’re better or worse off for it.

It’s a shame this turned out to be Ford’s last Trek novel, as it’s obvious from both the extreme difference between the two he wrote and the thrust of his other writing in general that he would have done something even more wildly different with a third. But it’s pretty incredible that in just two books, he left such an indelible impression on the franchise. However, we’re now knocking on Next Generation‘s door, and it won’t be long before nearly all the influence he and a handful of other authors had on certain elements of the franchise will be almost entirely eradicated.

NEXT TIME: It’s finally time for our first adventure with the Next Generation crew as they have a fateful Encounter at Farpoint