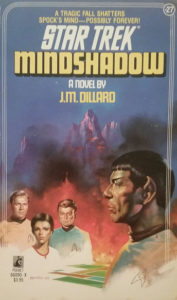 Today, Spock sings “Where Is My Mind?” while Kirk and Bones butt heads as they vie for the privilege of paging Doctor Love. Meanwhile, Kirk’s desire to help people in need proves at odds with the Aritanians’ desire for everyone to go away and leave them alone. Will Spock’s mental faculties come back in time to fill in the blanks for his befuddled, love-addled captain, or will he live out the rest of his days as a vegetable in his parents’ basement? This week, we shine a light on Mindshadow, or, How to Win Friends and Influence High-Ranking Starfleet Officers.

We join the crew on Aritani, a planet of peaceful but aggressively Luddite farmers. This review may have gone up on 4/20, but they’re in no mood to appreciate any blazing up, because it’s being done by enemy fighter ships to their crops and families. The Aritanians don’t really want the Federation all up in their beeswax, but they also don’t want everything and everyone they love set on fire, so they reluctantly accept outside help.

Scotty installs a shield around the planet, but the attacks continue, leading to speculation that the attackers have shield neutralizing capabilities, to which the reaction of friend and foe alike is basically “Shield neutralizer? LOL, y’all been watchin’ too many movies.” However the ball got dropped, the Aritanians don’t want to hear about it; the Federation tried to help and their solution failed, so it’s “bye, Felicia” as far as they’re concerned. They would prefer to let their fields be burned and their families murdered in peace, thank you very much. Kirk, of course, won’t take that answer lying down; he WILL fix this mess, because that’s what he does, by gar. Meanwhile, Spock, who only has eyes for his tricorder, meanders off to the mountains to check out some fascinating readings and winds up taking a nasty spill to the tune of 400 feet. Luckily, he survives, though not without suffering heavy brain damage and forgetting pretty much everything that makes him a Vulcan.

Amid the chaos, Emma Saenz, a doctor specializing in Vulcan neurology, reports for duty. The fact that Starfleet bureaucracy worked so quickly to get them extra help probably should have thrown up some red flags, but everybody’s running around like a chicken with its head cut off, so it’s understandable they missed a spot check. In any event, she immediately charms the pants off both Kirk and McCoy, literally—the latter especially, who falls deeply and madly in love with her despite the yucky age gap (she’s only two years older than his daughter Joanna). But is she trustworthy? Well … yes and no, which I know sounds meaningless but is about the deepest I can go into detail without spoiling too much.

Look, I’ll be honest with you: it’s Romulans again. NO WAIT DON’T LEAVE! Their presence isn’t crucial to the most important elements of the story—in fact, they mostly seem to be around just because someone’s got to man those fighter ships and organize the effort to steal Aritani’s dilithium, and it might as well be them. But despite bog standard villains, Mindshadow gets much deeper into interpersonal relationships than you might expect from such a compact, quick read. Kirk and McCoy argue bitterly, score solid points off each other, and strain their friendship; Scotty fully understands the reason Kirk takes the actions he takes toward him but feels betrayed nevertheless; Spock insults the master trying to retrain him in his Vulcan faculties and treats his mother with unprecedented cruelty; and none of it feels contrived and out of character or comes from out of nowhere.

Following a few thicker, more character-intensive books, Mindshadow marks a return to a more brisk, episodic mission-of-the-week style. To me, it resembled a better-executed Vulcan Academy Murders—viz., Kirk is trying to figure out who’s killing people and how, but he’s distracted by a fine young lady who’s got him thinking with the wrong head. But Mindshadow‘s mystery has a lot more twists and turns as well as layers of moral complexity, and its’ characters motives are not as black and white as in that other story, making for a more compelling, less infuriating read.

That said, you still have to wade through a few obvious red herrings to get to the nitty-gritty. Scotty has the hots for an ensign under his command, and the only justification for his disproportionate anger at her death on Aritani is so he has motive later on when a Romulan prisoner being held for interrogation is murdered. I also at times lightly suspected the security chief, Lt. Tomson, of some shady dealings, though that may have just been because I didn’t like her attitude. There’s also another huge difference from VAM in that Dillard makes it absolutely unambiguous very early on that Emma Saenz is the one who’s up to all the no-good other people are getting accused of, and really what you’re waiting the whole book to figure out is why she did what she did.

Mindshadow also explores something I think is interesting yet gets glossed over a lot, which is the amount of stress a mission rapidly going south can put on a crew, especially its captain. Morale remains higher than in some other books I can think of, but Kirk is nevertheless far from in the mood to flash a Colgate-whitened smile here, especially toward his replacement first officer Varth Regev, whom I felt really bad for. He’s trying so hard and he’s so spunky and Kirk just gives him nothing! I seem to recall Shatner had some hangups about unflattering portrayals of Kirk, but I enjoy when authors and editors go out on a limb and portray something a little messier and more emotionally raw, and I consider the character well-served when authors are willing to allow him to smell a little less than rosy.

I was also impressed with the even distribution of character activity. Everyone gets plenty to do here and no one feels neglected or non-contributing—all of the main cast gets a full plate, and there’s plenty left over for several secondary and tertiary characters. Contrast Mindshadow with something of comparable length, like the similarly named but significantly less good Shadow Lord, which focused exclusively on just two characters and didn’t get either of them right. It’s worth pointing out when it goes wrong, but even more so when it goes right.

I’m beginning to develop what I think is a pretty reliable rule of thumb: if an author has written event novels and/or movie novelizations, then it’s a good bet their regular novels will be worth checking out. This is the first Star Trek novel written by Jeanne Kalogridis under her J.M. Dillard pseudonym, and it’s definitely not going to be the last. She’s got a few more numbered novels coming up in short order, which I’m now looking quite forward to; she took over movie novelization duty from Vonda McIntyre starting with Star Trek V: The Final Frontier; and she wrote books one and four of the Lost Years saga, which chronicles the time between the end of the five-year mission and The Motion Picture. Hopefully I don’t sabotage myself with high expectations, but somehow I doubt that’ll be the case.

I give Mindshadow 4 out of 5 scorched fields. Dillard proves in her freshman effort that you don’t necessarily have to pen a sprawling epic or blow anyone’s mind to weave a solid Trek yarn. It’s got enough intrigue for a book twice its size, and it’s an excellent bar-setter for Dillard, whose McIntyre-esque arc with Pocket Books I predic’ we gon’ enjoy.

NEXT TIME: Crisis on Centaurus