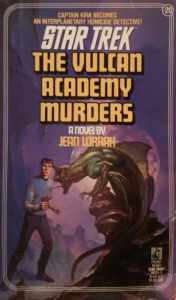 I’m going to level with you: I’m not very good at crime procedurals. Ask my wife. We can be sitting watching an episode of Law & Order: SVU or what have you and she’ll have the killer figured out before the theme song. I’m not nearly as sharp as she is, so I sort of let events wash over me, and then at the big reveal I’m usually just like, “Oh, okay.” So the fact that I solved the central mystery of The Vulcan Academy Murders with nearly 200 pages still left to read does not reflect well upon it.

In the midst of a Klingon battle, redshirt du jour Carl Remington bears the brunt of a nasty explosion and becomes entirely paralyzed. Mentally, he’s still all there, but there’s no treatment, so writing him off and waiting for him to die is their only option … OR IS IT? Spock hints at the existence of a treatment that may save Remington. Bones reads all the medical journals; how does Spock know about a medical advance that he doesn’t? Because it’s experimental, and therefore not cleared to be published; but more importantly, because his mother, Amanda Grayson, is undergoing it to get rid of whatever fictional space disease she has for story purposes. Well, if it’s good enough for Amanda Grayson, then by gar, it’s good enough for some redshirt we just met. The matter is settled: to Vulcan! This all happens in the span of nine fairly large-print pages, so kudos to Lorrah for hitting the ground running.

Then we move over to Sarek, who when he’s not gadding about the galaxy playing ambassador is apparently teaching college computer courses. He’s a lot warmer and, dare I say, human than in his “Journey to Babel” appearance. He actually tells jokes, even! He has a human assistant named Eleyna Miller who is described as having a somewhat cold disposition, which Sarek credits to the idea that humans residing on Vulcan sometimes try to be “more Vulcan than Vulcans” and end up overdoing it. Sarek notices Eleyna studying the stasis treatment Amanda is undergoing and thinks, aww, that’s sweet, she’s taken an interest in my wife’s recovery. I can’t point to anything quantifiable about it, but this is where I got the first twinge that made me think [Hank Hill voice] “that girl ain’t right”, and thanks to some other overly telegraphed tells, you can follow this feeling without diverting from it for the rest of the book and end up being right.

If you’ve been tracking these posts, you may have noticed that the more I like a book, the less I (try to) spoil it. The reverse is also true. Lorrah sets up motives and alibis, deploys red herrings to throw you off the scent—your basic procedural stuff— but it’s the elements that are conspicuously absent that end up arousing suspicion. Pages 102 and 103 contain a neat summary of all the suspects’ alibis to that point—except, notably, Eleyna’s. (Kirk has her on the suspect list, but doesn’t seriously consider her until it’s almost too late.)

It’s profoundly irritating to sit through a book that makes an oblivious dumdum out of a guy like Sarek. And yet at the same time, there’s a maddening logic to everyone overlooking Eleyna. Kirk’s too horny to see what’s right in front of his face, but it’s totally in character for him to get blindsided by such a thing; Sarek doesn’t home in on it because murder just doesn’t happen on Vulcan, and while my inclination is to wonder how the nuts and bolts of the stasis treatment are any of Eleyna’s beeswax, a Vulcan wouldn’t see anything wrong with accruing knowledge for the sake of having it; and McCoy is up to his eyeballs in injured humans and Vulcans and doesn’t have time for Law & Order shenanigans. It’s possible to understand why the characters might not catch the signs, but it doesn’t stop you from wanting to throw the book at a wall every time someone misses an obvious clue.

I haven’t even gotten to Kirk, Spock, and McCoy arriving at Vulcan and meeting Sorel and Daniel Corrigan yet. They’re the duo who invented the experimental treatment, and who incidentally also pioneered the techniques that made Spock’s birth possible. Their treatment consists of placing patients inside an anti-gravity stasis field of blue mist that gradually heals all their nerves and even de-ages them a few decades to boot. The main drawback is that if it’s interrupted for even a millisecond, the patient dies. To prevent it from accidentally cutting out, it’s maintained by two separate power supplies running simultaneously but independently. It’s easy to imagine one power supply failing, but two at the same time? Inconceivable!

Well, they better start conceiving it, because it happens, first to Sorel’s wife T’Zan. Sorel and T’Zan’s Vulcan marriage bond being broken is so traumatic that Sorel nearly dies too, and it takes Daniel Corrigan mind-melding with him to pull him back up onto the cliff, so to speak, in the first of many scenes that showcase a real talent Lorrah has for poignant interactions involving Vulcans (more on that in a bit). Then the plug gets pulled on Remington, which might be the worst a redshirt has ever been treated in Trek history. It’s one thing to go through them like Kleenexes, but to build up his service record and tell stories about him and pay him compliments like how he reminds Kirk of a younger version of himself … and then have him die in a coma? That’s just cruel!

One by one, Kirk winnows down the list of suspects, but it’s hard to care when you know it’s all heading toward the Eleyna reveal. Honestly, it’s a little offensive that T’Pau is even a suspect at all, even if logic and fairness dictate she should at least go through the formality of interrogation like everyone else. It’s tempting to want to follow the Sendet arc to its (ahem) logical conclusion—Sendet being a Vulcan who feels the purity of their race is threatened by the fact that Sorel’s daughter T’Mir is marriage-bonding with the human Daniel Corrigan and not with him—but it never aligns neatly enough to feel okay about abandoning your suspicions about Eleyna. All the while, Kirk continues to miss obvious cues from Eleyna and let his other head do the thinking. Other Head thinks it would be a great idea to go on a picnic with her out in the middle of the desert; he only realizes there might be something less than kosher about her when she pushes him off a cliff and leaves him for dead. (He almost dehydrates because he was so ready to bone a college hardbody under the light of T’Khut that he forgot basic common-sense measures like bringing a canteen.)

In related news, here’s Kirk’s theme song for this story:

The only salve is that in-between the very shoddy detective work, you get a lot of very well-done character moments, such as Kirk, Spock, McCoy, and Sarek sitting around the house chit-chatting, or Kirk convincing T’Pau of his deep respect for Vulcan history. If this book was just 200 pages of nice moments between Vulcans and humans and the two races coming to understand each other a little better, it would have been fantastic. I wouldn’t have even cared if there was no plot. There are also approximately 800 mind-melds in this book, with various applications ranging from bringing people back from the brink of death when the stasis treatment gets sabotaged to extracting information in a process called Verification (which does not involve a little blue check mark). The Vulcan aspects of the story are unimpeachable and not under fire or in question—just the Academy and Murders parts.

So it could have been a pretty good book, if not for that pesky necessity known as conflict. As it is, the good parts just serve as exceptionally pretty window dressing that provide a welcome diversion from the slog of reaching the foregone conclusion.

The only thing saving this book from a 🤢 is the mastery of Vulcan understanding and interaction displayed here. There are so many well-written intimate Vulcan/Vulcan and Vulcan/human moments crammed into this book that it’s a cryin’ shame they have to share real estate with one of the most clumsily handled murder mysteries I’ve ever read.

There’s a sequel to this book that we’ll get to later this year that I think is sort of along the same lines as this book, but involving a plague rather than a murder. I know I read it when I was a kid, but I remember literally nothing about it. It’ll be as new to me now as it was then!